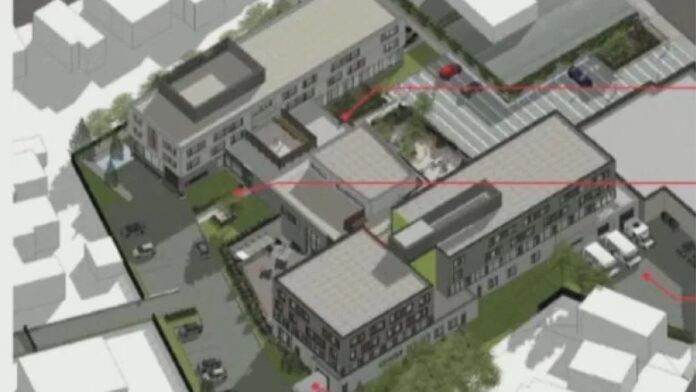 The planned shelter, which had a project value of $50 million in 2020, will include complementary support services to help some of Ottawa’s most vulnerable people. It is unclear how design changes and inflation will change the overall project costs.

Local opponents, who have fought their concerns through to the Local Planning Appeals Tribunal (LPAT) and failed to stop the project there, believe the shelter will concentrate poverty and drug abuse problems in an area of the city already plagued by social problems. However, the city and Salvation Army believe the shelter has been designed to complement, not harm, the neighbourhood.

A revised design calls for an H-shaped facility with a four-storey wing to the west and a three-storey wing to the east, connected by a two-storey communal area. The changes from the initial 2017 concept mean the west wing has been shortened from six to four storeys to ensure the building is compatible with existing homes nearby, the city said in a statement after the June 3 committee decision.

The current design also includes 32 supportive housing units, and the emergency shelter component will be 25 per cent smaller than originally conceived, offering 99 beds instead of 140. A proposed addictions program has also been eliminated from the plan.

While facing Montreal Road, the facility is set back considerably so as not to limit the road’s continuing development as a traditional mainstreet.

While city council won’t review the decision – final authority for site plan approval rests with the planning committee —  The Salvation Army still needs to submit another application to lift a hold on the zoning for the property. That application can be brought forward now that the committee has endorsed the Site Plan Control application.

Despite the changes, the majority of the public delegations attending the committee meeting denounced the project.

“We still don’t know what’s going to happen in that space,” said Nathalie Carrier, executive director of the Vanier Business Improvement Area (BIA). “The Vanier community has all along debated the fact that there should be housing and not shelters. Shelters should be the exception to the rule,” she said.

Marc Maracle, executive director of Gignul Non-Profit Housing Corporation, also expressed concerns about the project, saying: “The Indigenous community and the Ottawa Aboriginal Coalition has been very clear from the beginning and have maintained our concern about the scope and scale of the proposed facility and how does it fit in with the Vanier community.”

“We also take the position that programming informs design, so what’s going to happen in this building is going to shape the spacial configuration and ultimately how it’s expressed in design form on the street,” Maracle said.

Some groups and individuals support the project. “The design and the site plan have been strongly informed by the voices of the clients that we serve, including our Indigenous clients,” said Wendy Muckle, executive director of Ottawa Inner City Health, which will provide services at the site.

“I would also suggest to you that of all the voices that you’re going to listen to today, that perhaps the voices of the people who actually need to access and use the facility should perhaps be the most important.”

Local Coun. Mathieu Fleury, who is not running for re-election, said he will continue to fight the project by working with upper levels of government to block funding for what he called “outdated shelter models.”