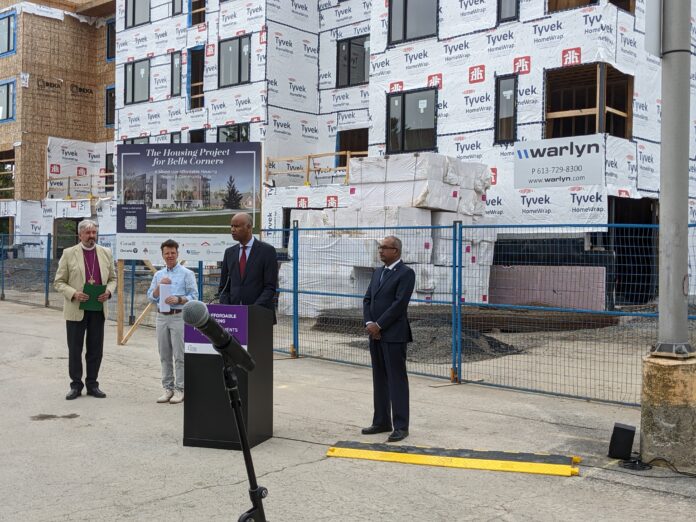 Federal, municipal and faith community leaders celebrated the near-completion of a $12.5 million affordable housing and community resource centre project in Ottawa on Monday – and explained how they are working to expand housing options in an environment of rapidly rising construction costs and delays.

The four-story Hollyer House will include 35 housing units, geared largely for single women and families. There also will be a community room, food cupboard and operating space for the Western Ottawa Community Centre.

Warlyn Construction is building the structure for the Anglican Diocese of Ottawa on a Christ Church Bells Corners site in the west-end neighbourhood, on what had previously been a two-story rectory. The Western Ottawa Community Centre had its offices in the rectory before its demolition.

The federal government under the guidance of Ahmed Hussein, Minister of Housing Diversity and Inclusion, issued a news release and media advisory saying the minister would be “making a major national housing announcement” at the 3865 Old Richmond Rd. site.

Hussein used the event to provide scripted remarks outlining the government’s $72 million, 10-year National Housing Strategy (NHS), with a $13.2 billion budget within the National Housing Co-Investment Fund (NHCF), designed to give priority to projects “that help people who need it most, including women and children feeling family violence, seniors, Indigenous peoples, people with disabilities, those with mental health issues, veterans and young adults.”

The federal government allocated $6.6 million from these funds to Hollyer House, of which a portion is a forgivable loan. Ottawa city councillor Catherine McKenney at the media event said the city is waiving about $740,000 in fees and development charges, along with $4 million in Ontario Priorities Housing Initiative (OPHI) funding.

Still, the project – like others throughout the construction industry – is experiencing cost overruns and delays. The building was originally expected to be completed by now, but won’t be finished until the fall. Peter John Hodge, director general, community ministries, for the Anglican diocese, said the project is about $500,000 over budget.

Hussein, speaking for the federal government, indicated that it will provide the funds to make up for the shortfall.

“We have flexibilities within the National Housing Strategy to deal with these eventualities,” he said. “It’s not unlimited, but we have some flexibility. It will be a challenging to make everything work but we are doing everything on our end to make sure that we’re helping proponents to navigate the difficult challenge of rising building supply costs.”

Hussein said the government is accelerating its funding for housing projects throughout the nation, moving money that would have been allocated in the future, to projects to be completed within the next two years.

The Bells Corners initiative is part of a broader initiative by faith communities to put their real estate assets to work to provide affordable housing.

The Ottawa Citizen reported that Rev. Cannon P.J. Hobbs, director general of community ministries for the Ottawa Anglican Diocese, said the diocese is currently exploring an affordable housing projects on the grounds of Julian of Norwich Anglican Church on Merivale Road in partners hip with the Multifaith Housing Initiative, and also an addition to double the number of units at Ellwood House in Alta Vista.

Hussein said he has been telling faith groups that “there’s a place for you in the national Housing Strategy if you would like to partner with us to leverage a lot of the real estate that you have and turn it into affordable housing.”

Overall, Hussein asserted that the NHS will invest more than $72 million over the next decade.  In the current year’s budget, the government proposes to advance $2.9 billion in funding under the NHCF to accelerate the creation of as many as 4,300 new units and repair as many of 17,900 units.