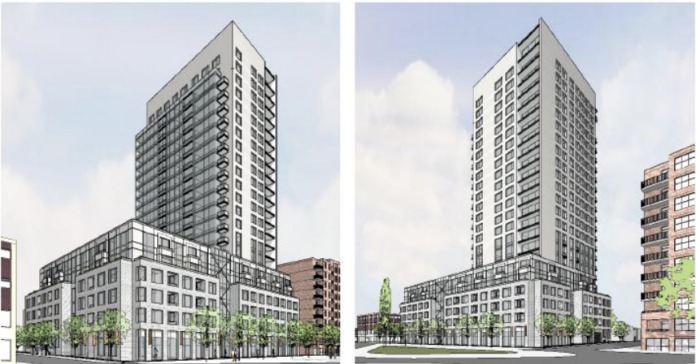 The City of Ottawa’s Planning Committee has directed staff to work on strategies to deliver community benefits when federally owned LeBreton Flats land near downtown is redeveloped.

The National Capital Commission (NCC) aims to see the 29-hectare area developed over a 30-year period with 4,000 housing units, 90,000 square metres of non-residential space and 12.5 hectares of parks and open spaces. The city would be directly responsible for significant portions of the development, and in preparation, staff have worked with more than 25 groups and community associations to develop a comprehensive list of community needs.

The list includes benefits related to equity and inclusion, the local economy, sustainability and resiliency, mobility, parks and facilities, and the public realm. The committee directed staff at its meeting on Sept. 23 to report back by the second quarter of 2022 about how best to fund and develop a targeted set of investments from that list: a municipal park and community building, transportation infrastructure pieces, a non-profit child-care centre and investments in affordable housing.

The committee also approved amendments to permit another NCC development, this one on lands south of Sir John A. Macdonald Parkway in Mechanicsville. The concept plan is for the future development of five embassies and a federal park on lands west of Slidell Street. The eastern portion of the site would be a federal park and the plan promises to improve area sidewalks and add pedestrian and cycling connections to riverfront park space.

The committee approved several reports that would add multiple high-rise buildings across the city. At Lees Avenue and Chapel Crescent, south of Sandy Hill, an approved development would add 1,460 units in four buildings – two 28-storey and two 32-storey towers.

The former dairy plant just north of Highway 417 between Clyde and Churchill avenues would be redeveloped with seven buildings ranging between nine and 39 storeys, along with a commitment that 10 per cent of units would be affordable for 20 years.

On Carling Avenue, across from Westgate Shopping Centre, a 24-storey building would add 175 units to the area while in Kanata Town Centre, a development that includes three 10-storey buildings on Campeau Drive would add 798 rental units along with non-residential space.

Amendments approved for the Riverside South Community Design Plan would allow for minor changes to a planned subdivision near Limebank Station, at the eventual terminus of O-Train Line 2.

The amendment would relocate a city community centre, library branch and park within that subdivision, ensuring the city can move ahead as planned and avoid delays delivering those facilities. A planned French public school would also be moved slightly to ensure it will be situated across the street from the community centre.

The committee also approved a site plan to develop a property in South Merivale Business Park with a nearly 26,000-sq. m. facility that would receive shipments from manufacturers and retailers before repacking and redistributing. The development would support the objective to deliver up to 10,000 jobs in the business park. The proposal also includes plans for a nearby, 6,300-sq. m park.

Recommendations from the meeting will rise to Ottawa City Council on Oct. 13.

Meanwhile, at a meeting in early September,  the planning committee approved a six-storey building with 30 units at the northwest corner of Bank and Florence streets. The site itself was left vacant after a 2002 fire destroyed the  heritage building that once stood there.

A heritage permit is needed as the property is within the Centretown Heritage Conservation District. The committee agreed with staff’s assessment that the design of the new building is sensitive to the site’s history and surroundings. The zoning amendment would see a two-metre increase in permitted height and eliminate the need for two visitor parking spaces in this pedestrian-friendly neighbourhood that’s well-served by public transit.

The committee approved Official Plan and zoning amendments that would permit a on an entire city block just north of Somerset Square Park. The proposed building would include 248 residential units, with ground floor commercial space on the south side, facing Wellington Street West. The design would see building height drop to nine storeys mid-block and then to just four storeys along Armstrong Street to the north, where a row of townhouses would face existing homes.

The amendment would permit additional height and require that the applicant invest $361,000 in community benefits, including traffic calming measures and a commitment to bury hydro lines along Garland and Armstrong streets. The applicant would also provide $250,000 towards the Hintonburg Community Association for land acquisition.