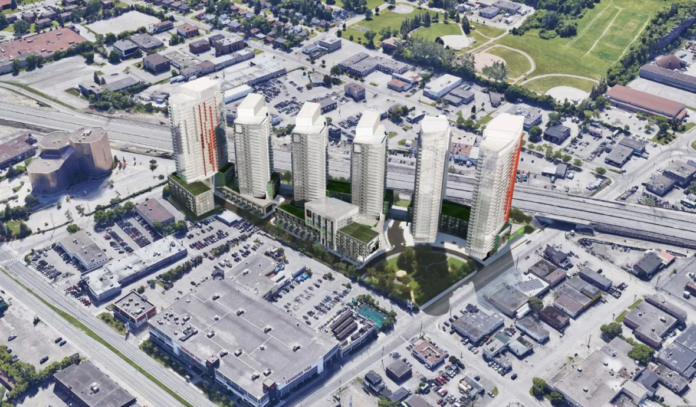 Developers are seeking City of Ottawa planning approval to convert a former dairy factory along Highway 14 into a project with six highrise towers and more than 1,900 units.

City planning staff have recommended councillors on the planning committee vote to approve the application by Claridge Homes for land on Clyde Avenue, behind the Canadian Tire store on Carling Avenue, at its meeting on Thursday (Sept. 23), The Canadian Broadcasting Corp. (CBC) reports.

The developer describes creating a “self-contained neighbourhood” that also includes six-storey buildings and townhomes, and a new city park on Clyde Avenue.

Originally, the six towers would all have been similar heights, but Claridge agreed to make each one a different height to “create a more dynamic and interesting skyline,” city staff wrote in their report.

Staff say the plan would use an underdeveloped brownfields site and would add hundreds of units without disrupting immediate neighbours because there are none, CBC says.

The city typically targets projects with  tall towers to be within a short walk of rapid transit stations, but this project is 2.2 km away from the nearest future light rail station at Dominion, the broadcaster reported. Staff indicated that Carling Avenue is a “transit priority corridor.”