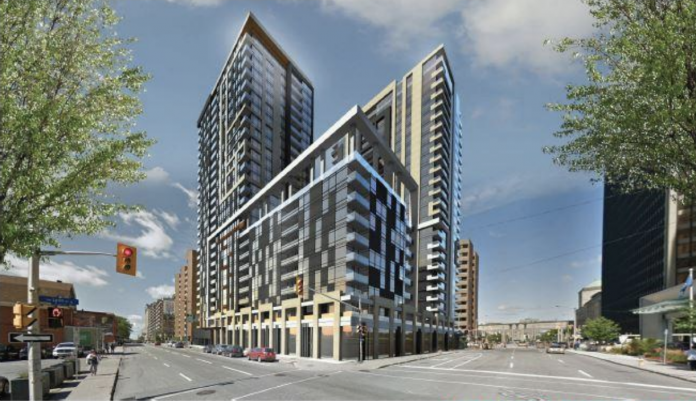 The project, owned by a division of Claridge Homes, will include 588 units, some to be described as affordable, if special Canada Mortgage and Housing (CMHC) financing can be arranged.

The original idea had been in the works since 2010, but FoTenn Consultants put its application on hold while the city planned and built its Confederation Line light rail transit system.

The project will replace an Albert St. surface parking lot and a two storey building on queen street currently used by a restaurant, an adult entertainment parlour, and the former Glue Pot Pub.

The city’s independent urban design review panel studied the project late last year. Claridge implemented several recommendations into the design, including a direct indoor connection to the Lyon LRT station, but didn’t incorporate others, like a suggestion to lower the podium from nine to five storeys to “bring more natural light into units on lower floors and reduce the canyon effect.

Claridge had originally proposed building three highrises on the site.  The updated design is a “significant improvement from the previous design,” the planning department said in its documentation.

Claridge is in negotiations through the CMHC’s Construction Financing Initiative program, which aims to increase the stock of rental units in tight rental markets by providing low-cost loans to developers, so a percentage of the units can be priced below market rent levels.

City council is expected to consider the development at its next meeting on June 12.