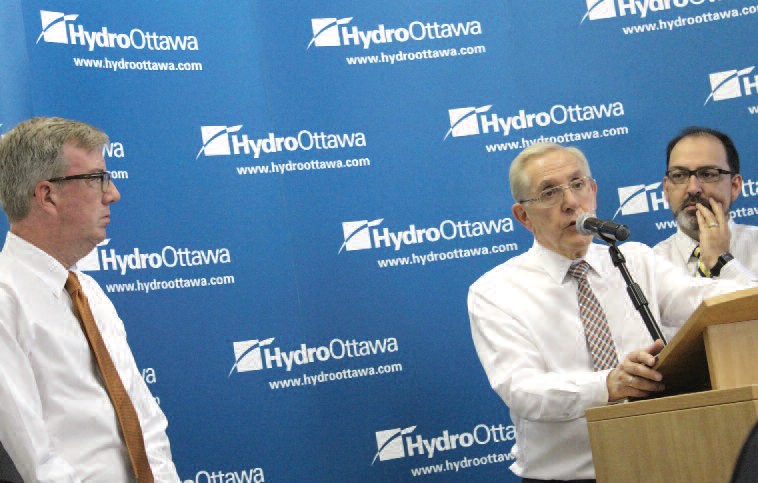 Hydro Ottawa says it plans to purchase Hydro-Quebec’s remaining Chaudiere Falls assets, though the utility declined to say how much it is paying for the one-third share of the Ottawa River ring dam, along with a 27-megawatt generation on the Gatineau side of the falls.

The utility dressed up a media event at the Booth St. project on June 20, with guests including energy minister Glenn Thibeault and infrastructure minister Bob Chiarelli, as construction continues on the $150 million upgrading project to construct a new 29-megawatt hydroelectric facility at Ottawa’s oldest hydroelectric sites.

However, while the planned purchase will increase Hydro Ottawa’s capacity, it won’t add to the total electricity generation, and part of the deal with Hydro Quebec relates to energy purchase arrangements, whereby the two utilities co-ordinate “at cost” tradeoffs for energy during their respective peak seasons. (Quebec Hydro needs more power during the winter because many homes are heated electrically, while Ontario has higher demands in the summer.)

The current construction project through Hydro Ottawa’s affiliate Energy Ottawa, will provide energy for 20,000 homes per year. The project has been designed to avoid obstructing Chaudiere Falls’ views.

Hydro Ottawa is procuring all of the equipment, EBC Inc. is acting as the general contractor and Hatch is providing the engineering and construction management services.

The project’s renewable power will feed into the provincial grid, reducing greenhouse gas emissions by 115,000 metric tons of CO2 per year.

University of Ottawa to spend $83 million on new campus Learning...