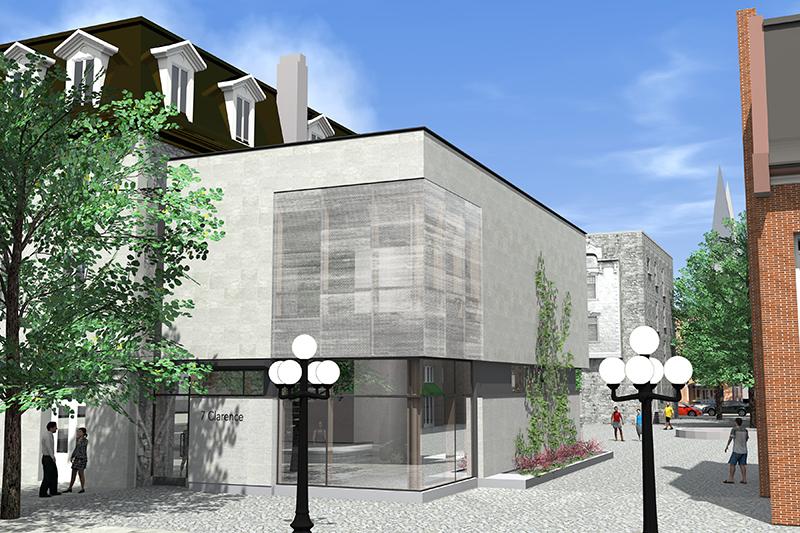 The National Capital Commission says it will invite tenders for the reconstruction of a building at 7 Clarence St., while undergoing major renovation and restoration work at nearby Sussex Dr. projects, this fall.

Construction will begin in January 2016, the NCC said in a statement, following collaboration with neighbours, “community stakeholders, heritage experts and other interested parties.”

“In April 2015, following a series of public and stakeholder consultations, the NCC presented its design concept to Ottawa City Council and to the advisory committees involved. The concept is for a two-storey building that will have a similar footprint to the previous building. The design will be in keeping with the heritage character of the ByWard Market area, as well as aim to encourage vibrancy and activity in the Tin House Court area. The new building will be constructed using new materials, as well as materials salvaged from the previous building, and will be universally accessible,” the NCC announcement said.

“As the start to the construction phase approaches, the NCC continues to work with participants who attended the previous consultations. A public art project has been proposed, and is currently being discussed as a means of enhancing the exterior surroundings of the future building.”

The NCC says when the work is complete, the new building will become one of the NCC’s 2017 Confederation Pavilions open to the public for the celebrations around the 150th anniversary of Confederation. “Several diplomatic missions in Canada have already expressed an interest in presenting public events and programs for the many visitors expected in the Capital.”

Along with the Clarence St. project, the NCC will “undertake major restoration and upgrading work on heritage buildings located between 445 and 465 Sussex Drive, at 13–15 Clarence St.. and in the Tin House Court.