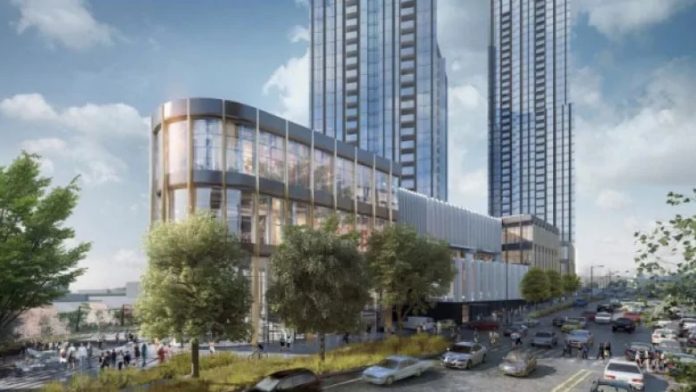 Intensification spurred by Ottawa’s Light Rail Transit (LRT) system will create some mammoth construction projects in the next few years, as planning committee and impending city council approvals clear the way for construction.

Notably, TIP Albert GP Inc. plans to build what will become the city’s tallest structure – 65-storeys – across from the Bayview LRT station. This is double the height of the city’s current tallest building.

And not too far away, in the Lebreton Flats, the city’s planning committee has approved Claridge Home’s plans for five towers – one reaching 45-storeys – east of Booth St. adjacent to the Pimisi light rail transit station.

Meanwhile, the Bayview LRT-area property, at 900 Albert St., would include three towers at 65, 56 and 27-storeys, all on three-storey podiums, with six levels of underground parking.

This development would have 1,241 residential units, office and retail space, and 1,059 parking spaces (with 740 spots for indoor bike parking.)

Not everyone is happy with the proposals.

The five-tower Claridge proposal, which could take 15 years to complete, aroused the ire of some residents of the existing East Flats complex, who signed a petition against the plan.

“We were unprepared for the current proposal by Claridge Homes,” Ed McKenna, who lives in the existing complex, told the planning committee in June. “The scale of this proposal is, in a word, just overwhelming,” he was quoted as saying in The Ottawa Citizen.

Meanwhile, regarding the Albert St. project, Somerset ward councillor Catherine McKenney indicated frustration with some of the design elements, including the tower’s size, which she says will “neither complement nor respect its location.”

“The proposed towers are overwhelmingly tall and out of scale with both the surrounding community and the established growth and built form objectives in the Community Design Plan, Secondary Plan, and Zoning By-law,” she wrote. “Furthermore, the 65-storey tower will be unique in Ontario and possibly Canada in its location and immediate surrounding built context.”

As well, the city’s urban design review panel also expressed concern about the building’s height in relation to the rest of the street, calling the proposed permitted height “incredibly significant, with considerable implications for the city’s skyline.”

However, city staff say the building is in a prime intensification spot and asked that the planning committee on July 10 (as OCN goes to press) give the project the go-ahead and send the file to City Council for approval on the very next day, July 11.

In addition to these two large-scale projects, in June the city’s planning committee also set the zoning for the new central library/archives project on at 557 Wellington St., allowing for a maximum 12-storey structure. Up to 25 storryd will be allowed for National Capital Commission properties near Booth St.

Council was also set to vote on these planning committee decisions at its July 11 meeting.

Ottawa’s tallest building is currently the Minto Metrople condo in Westboro. It is 108 m., or 32-storeys tall, though several taller buildings are under development and it will look like a dwarf compared to  the 65-storey proposal for 900 Albert, at the southwest corner of Albert and City Centre Ave.