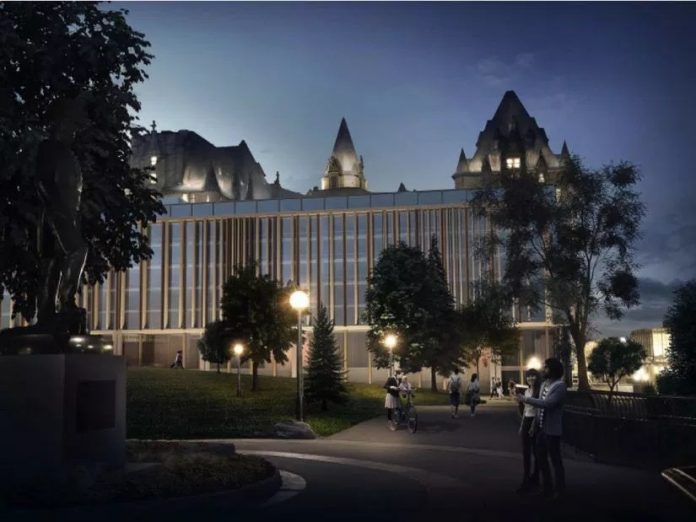 The City of Ottawa’s Planning Committee has approved a heritage permit for the seven-storey addition proposed at the rear of the Chateau Laurier Hotel, although heritage activists are still unhappy with the design.

The deal is still not done – as the final design still needs to go through the site plan approval process with city staff, returning to City Council for final approval.

That process will likely take several months, possibly past the Oct. 22 municipal elections.

The Chateau Laurier is protected under the Ontario Heritage Act. The planning committee approved the permit in June, conditional on further design revisions through the site plan process, as recommended by the city’s Built Heritage sub-committee.

“The latest design is lower than any previous versions and makes greater use of limestone and bronze to reflect the materials of the historic hotel,” according to a statement from the city.

However, Heritage Ottawa says it is “gravely concerned that the City of Ottawa may be on track to approve what would be the most disgraceful act of heritage vandalism of our generation.”

The Toronto-based designer, architctsAlliance says its latest submission to the City of Ottawa has made several modifications to the original plan, which would have resulted in two pavilions of 11 and 12 storeys containing 218 rooms. The original proposal resulted in an intense backlash when it was introduced in 2016.

The architects say the revised design takes a contemporary approach to the addition instead of mimicking the original building’s Edwardian style. The lower height (preserving the hotel’s views) with more Indiana limestone and bronze, will respect the property’s heritage.

However, Heritage Ottawa says the changes don’t resolve the structure’s fundamental clash with the chateau, which conveys “a sense of romance, mystery, excitement, unpredictability and splendour.”