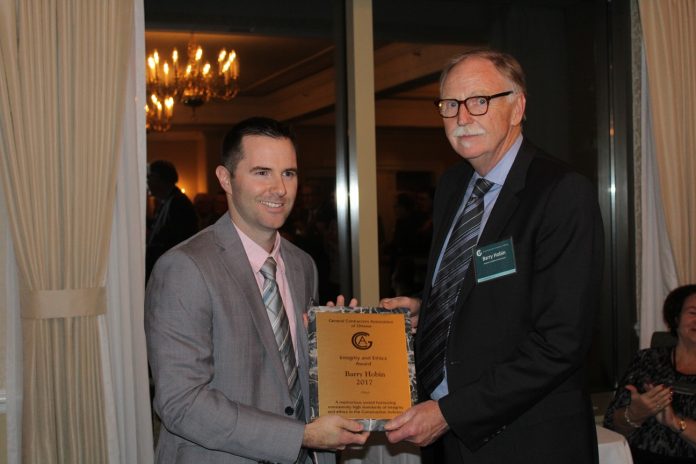 As colleagues, owners, consultants and general contractors gathered for the GCAO’s annual cocktail party, GCAO president Russell Grass outlined why the decision to award Hobin the award “was an easy choice”.

He said the GCAO received letters of recommendation from Wayne Jennings of Doran Construction, John MacDougal of Uniform Urban developments and Robert Merkley of Merkley Supply, as well as Wendy Brawley of Hobin Architects.

“Barry is a selfless promoter of other who never fails to recognize the contributions and skills of his staff and other members of the development team,” Jennings wrote in his letter of recommendation. “Barry always does the right thing.

In his recommendation, MacDougal said: “Barry’s passion for design and architecture is apparent in his ever-expanding portfolio of work, but it’s his strong core principles and beliefs that have translated into various philanthropic endeavours and fair business relations.”

“Barry will say that his commitment to the community and to his faith and the integrity that he displays through every phase of his life and every task fo his day has come from what his parents gave him,” Prawley said. “That may be true, and now he continues to pass this on to everyone that he touches through is professional and personal life.”

In his brief remarks in accepting the award, Hobin indeed thanked his family for their values and support. He also explained the importance of his faith and values, including tithing a share of his resources.