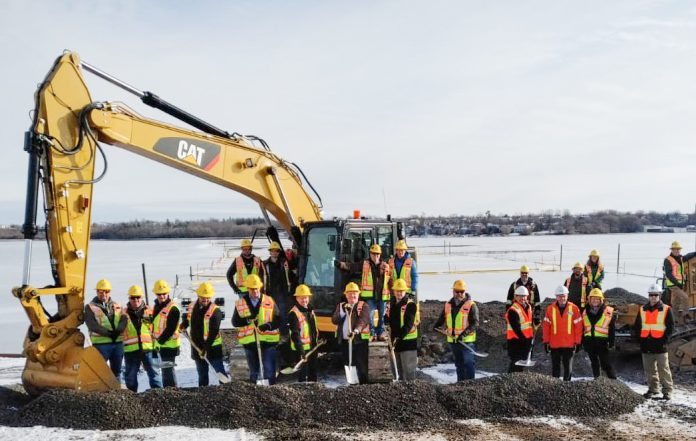 Government officials kicked off the in-water phase of the construction of Kingston’s new bridge over the Cataraqui River with a recent ground-breaking ceremony.

Kingston’s mayor said the city has reached “a milestone moment” with the project that has been “decades” in the making.

“We’ve talked about this project for so many years. Now the work begins,” Bryan Paterson said at the ceremony held at the end of John Counter Boulevard, where yellow markers stretched more than a kilometre across the Cataraqui River.

Parks Canada’s recent approval of the detailed impact assessment cleared the way for the work begin in the water.

Peter Kiewit and Sons, Hatch Ltd. and Systra International Bridge Technologies will immediately start work on a temporary stone causeway that will support the construction of the bridge out in the river.

“2020 is going to be a really big year for us,” Mark Mallett of Kiewit said. “Depending on where we are at, the superstructure might be started next year but that is really not slated until the following year.”

The cost of the $180-million bridge is being split equally between the federal, provincial and municipal governments.

Ernie Hardeman, Ontario’s minister of agriculture, food and rural affairs, said the need for a new bridge was discussed at a rural issues roundtable he hosted in Kingston several years ago.

“Fantastic to be in Kingston this morning to celebrate breaking ground on the beginning of construction for their new Third Crossing Bridge, which will help reduce traffic congestion, improve commuting and connect the east and west sides of the city,” he said.