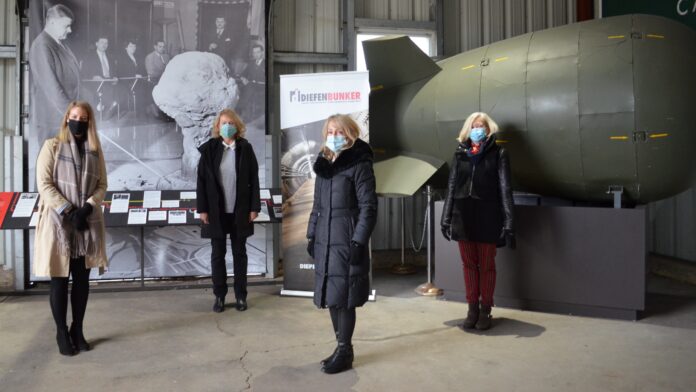 The Government of Canada is spending more than $596,800 through the Community, Culture and Recreation Infrastructure Stream of the Investing in Canada plan and Ontario is contributing $492,400. Also, the Diefenbunker Museum will fund $402,880 for the work.

The federal government’s investment “will keep this important part of our history alive to serve the local community as well as visitors from across Canada and beyond,” said Catherine McKenna, minister of infrastructure and communities.

“It will be a wonderful, accessible and inclusive learning resource for many generations to come.”

“For more than 20 years, The Diefenbunker Museum has played a key role in telling an important part of our history and educating Canadians from across our country,”  Kanata-Carleton MP Karen McCrimmon said in a statement. “This investment will improve accessibility within and ensure that the site continues to serve Canadians with quality cultural and recreational infrastructure, for generations to come.”

The Diefenbunker was commissioned by Prime Minister John Diefenbaker in 1959, as part of his government’s reaction to escalating tensions in the Cold War. The purpose of the bunker was to house key members of the government and military in the event of a nuclear attack on Canada.

The safety of its nuclear roof would allow the Canadian government to operate safely underground for 30 days in order to assist with the governance and rebuilding of the country. A series of Emergency Government Headquarters bunkers were built across Canada and, as the largest, the federal government bunker would come to be known as the Central Emergency Government Headquarters (CEGHQ Carp).

The bunker was designed and engineered by the Foundation Company of Canada, and the project was led by LtCol Ed Churchill. The entire construction process took less than 18 months, and was the first recorded use of critical path construction methodology in Canada. The bunker is 100,000 sq. ft. over four levels. It is made of 32,000 cubic yards of hand –poured concrete and 5,000 tons of steel. It is an extraordinary marvel of engineering, and built to withstand a 5 megaton nuclear blast from 1.8 kilometers away.

The bunker began operation in 1961 and remained in continuous operation until it was decommissioned in 1994. During those 32 years, it was also Canadian Forces Station (CFS) Carp, with a staff of 100-150 people and a 24-hour shift rotation. It was the site of some of Canada’s most top-secret communications throughout the Cold War. At all times during its operation, the cupboards and pantries were stocked with enough fresh food and rations to feed 535 people for 30 days and the building was prepared to go into lockdown at any moment.

The Diefenbunker was given National Historic Site status in 1994, and CFS Carp was closed the same year. The building remained empty until the museum’s establishment in 1997.

“To protect existing visitors and welcome new ones, as well as to preserve an incredible artifact, we need to bring the Cold War bunker into the 21st century,” said museum executive director Christine McGure.

“That is what this funding will do – it safeguards a unique piece of Canadian history. We are incredibly grateful to the federal and provincial governments for this important support, especially during these difficult times.”