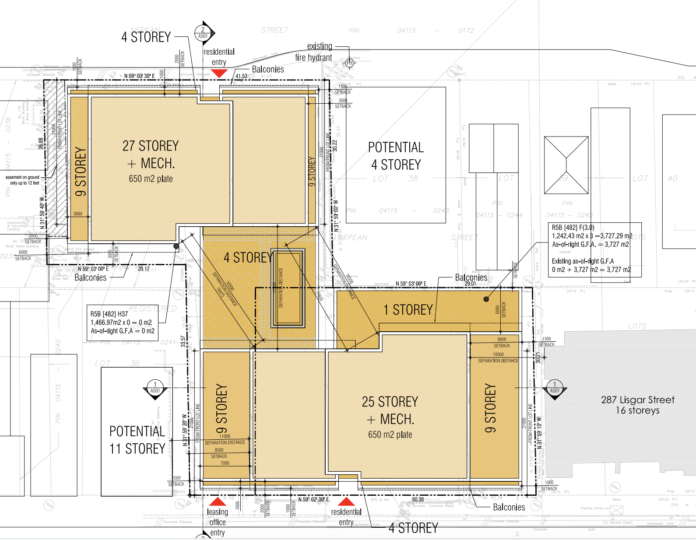 An Ottawa developer has submitted municipal planning applications to build two residential highrises of 25 and 27 stories in the city’s downtown area.

Municipal planning department application documents show that Richcraft Homes filed applications for the new structures structures on Dec. 7. The project would include nine-storey podiums,  connecting the towers at a third-floor link including a shared rooftop amenity area.

The planning documents associate the development with municipal addresses 176 Nepean St. and 293, 300, 307 and 309 Lisgar St., on a corner near Bank Street.

Graziani & Corazza Architects, based in Toronto, has designed the 521-suite project, including studio, one-, two- and three bedroom units. The development application doesn’t say whether the project is planned as a rental buiilding, condo, or combination.

Richcraft is seeking permission for less separation between the towers and reduced setbacks than current zoning rules require. It proposes that 30 parking spots among 282 spaces would be allocated for visitors, while the remainder would be available for residents or as paid public parking “depending on emerging market trends.”

“Considering the subject property’s proximity amenities on Bank Street and to the relatively new Parliament and Lyon LRT Stations, and as parking demand in the downtown core tends to be trending downwards…, it is difficult at this time to ascertain the market demands for resident parking,” the application says.