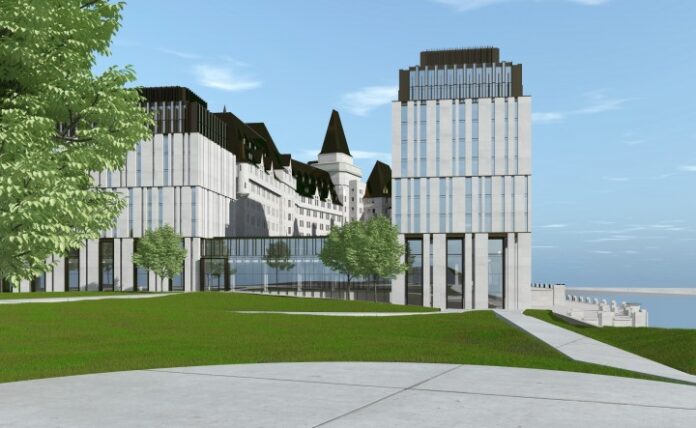 A long-stalled addition to the Chateau Laurier is closer to being built following an agreement between the historic hotel’s owners and a heritage group that fought initial plans.

Heritage Ottawa says a new design for the addition would preserve a picturesque view of the landmark’s rear courtyard and better mesh with the adjacent Rideau Canal.

The group is also applauding the use of Indiana limestone cladding and copper and bronze elements that reflect defining elements of the early 20th-century structure near Parliament Hill.

The new design and the settlement between Heritage Ottawa and Capital Hotel Limited Partnership, an affiliate of Larco Investments Ltd., will require approval by the City of Ottawa and a local planning appeals tribunal.

In a statement Thursday, Larco said an agreement has been reached with Heritage Canada to  “consensually resolve the legal proceedings presently before the Local Planning Appeals Tribunal … in such a manner so as to permit the revised architectural scheme.”

The company said it will resume talks with both the City of Ottawa and the National Capital Commission “with respect to the revised design plans.”

Original plans for the addition were widely panned by critics, variously described as resembling a giant air conditioner, shipping container or radiator tacked on to the regal building.

Ottawa Mayor Jim Watson tweeted he was pleased to see the parties had worked collaboratively and agreed on a new design.