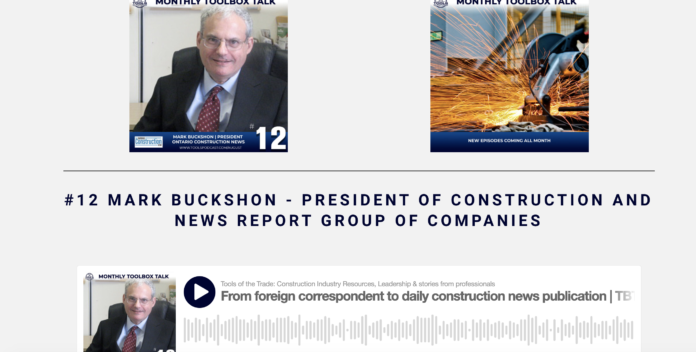 There are a few situations which make a journalist uncomfortable. We need to be unafraid to ask sometimes pointed questions. After a while, we acquire thick enough skin that we can manage our fears and get the story.

However, some of the most challenging experiences occur when we become the story ourselves. Fortunately, the most recent incident has been exceptionally positive, and you can listen to the results of my hour-long interview with Colin Toop of The Tools of The Trade podcast here.

Toop successfully delved into my story; the self-discovery process that ultimately took me to Africa and my life-defining experience as a young adult living through for 16 months through the end of the Rhodesia/Zimbabwe civil war. The interview also covered the history/story of the Construction News and Report Group of Companies, and my evolution from a journalist/foreign correspondent, to government PR writer, before starting the publishing business about 30 years ago. Finally, we explore the process to develop Ontario Construction News as the province’s first electronic daily construction trade newspaper.

I’m glad the interview went well, though I certainly recall other experiences that weren’t so much fun, including a wacky experience in 1975 when a Communist leader in Vancouver arranged a “press conference” attended by 450 angry East Indians to denounce a story I had written a week earlier for The Vancouver Province.

Hardial Bains, leader of the Communist Party of Canada (Marxist Leninist) had told members of the “East Indian Defence Committee” that police weren’t doing enough to protect their interests and perhaps the community needed to take measures to protect itself. With a little help from an overzealous copy editor, the story became that “Communists were advocating for East Indian vigilante action in Vancouver” – and the proverbial four-word letter hit the fan.

Toop’s podcast, thankfully, has a much happier result. I obviously have a rather strong personal bias in encouraging you to listen to it yourself.

Link for Tools of the Trade Podcast

Foundations of Construction: Temporary wartime homes were a Victory