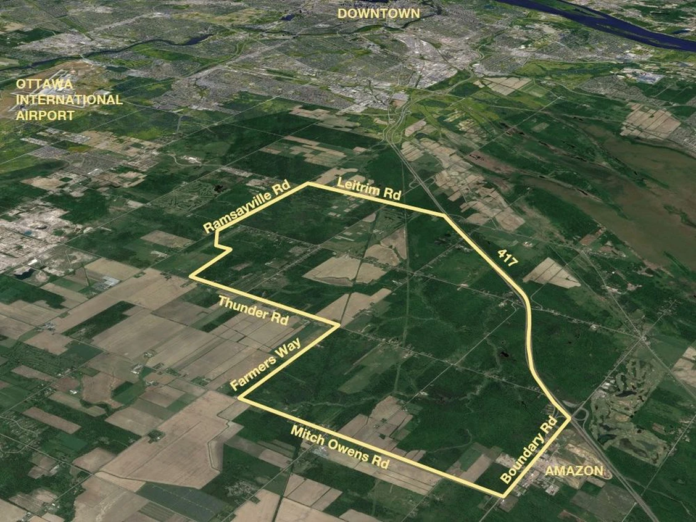 The impending decision by the City of Ottawa to allow about 500 hectares of rural land to be developed into a new neighbourhood, largely because the project is backed by the Algonquins of Ontario, is disturbing on several levels. But a thoughtful rethinking of urban priorities could solve the conflicts inherent in this decision and make everyone happy.

The First Nations group is working with a private-sector developer, The Taggart Group of Companies, to capture scarce available space in the city’s Official Plan as planners and municipal councillors push for intensification. The planning principle: Urban lands should be developed near existing municipal services and transit lines to avoid costly urban sprawl. The Tewin development fails (according to city staff) on key grounds, and city planners had recommended other sites on the city’s West End as more suitable for development.

“We are building a nation within this nation of Canada,” Lynn Clouthier, the Algonquins of Ontario negotiation representative for Ottawa, told councillors during the  planning committee meeting last week on future development inside Ottawa’s urban boundary. “We need that. It’s a confidence boost, if you like. That’s part of being accepted and included.”

Okay, but what about fairness and rules-based decision-making – at least if intensification is still a vital municipal priority? And clearly this isn’t a purely aboriginal initiative. Taggart is a successful, well established and profit-oriented developer.

“It is incredibly surprising that in an unprecedented move that politics has taken over a prescribed scoring process and months of work by city staff and included a parcel of land with a zero score on servicing,” said Claridge Homes, eQ homes, Uniform Developments, Multivesco and Minto in a statement. “The joint committee has taken a step backwards in their supposed step into the future with a new official plan.”

However, there is a simple solution to this conflict that would satisfy both the Algonquins and Taggart and the other developers fighting over scarce urban boundary land allocations. Simply put, scrap (or at least modify) the city’s intensification planning principles, which currently are based on ensuring 50 to 60 per cent of all new homes are built within the city’s existing urban area.

Although city councillors made their decisions remotely by a pandemic-mandated Zoom meeting, it seems they have failed to recognize a fundamental restructuring of the way many thousands of people live and work has occurred – and this change will survive the pandemic.

Simply put, many businesses and workers have discovered that remote work — or working from home – is practical, efficient and economical for a significant percentage of the workforce. Of course, many people will either need or want to return to conventional office settings once the pandemic crisis ends, but I can envisage that upwards of 10 to 20 per cent of the workforce will never return to crowded transit platforms, congested roads, and packed cubicles in office towers.

I realize my observations aren’t scientific and citing one major business, Ottawa’s Shopify, as an example of this trend cannot be considered conclusive. But equally I know from experience that the home based business model works well for many businesses which rely on thinking and conceptualizing rather than hard-product manufacturing or distributing.  And the business that employs me is as good an example as any.

The parent companies of Ontario Construction News and our network of Canadian and US regional construction websites has worked completely remotely for about five years, when we closed our small office and our administrator started working from her home. Deliveries and pre-pandemic occasional staff meetings are handled easily from a local storage locker facility, which includes mailboxes and a boardroom as part of its services.

Our employees work from their homes in several Ontario communities and in West Quebec, and we also use some offshore contractors for administrative, editorial, and information technology support. Rental/leasing costs are less than $200 per month. We never have to worry about “rush hour” or congestion and we get the job done in a timely manner, publishing a daily construction trade newspaper and several other publications quickly and efficiently.

We certainly experienced significant revenue losses when the pandemic struck – our business is not immune from the broader market – but equally, the remote work design minimized disruption and confusion, and government pandemic relief programs have proven effective in mitigating revenue declines (though obviously we have no need for the rental recovery programs.)

I’m confident that quite a few other businesses and (especially in Ottawa) non-profit and government organizations have discovered the advantages of home-based enterprise. This suggests that demand will likely be higher for larger single family homes with additional office/work space, and these can be located anywhere they can be built, including what would have been distant suburbs or otherwise rural areas.

So is “intensification” really the way cities need to go now?

I realize pivoting away from previous planning guidelines could have rather serious consequences. Notably, how will billions of dollars of currently-under-construction transit infrastructure ultimately be recovered? And we can safely assume that not business or organization is suited to the work-from-home model.

But I think there is a convincing argument that the “intensification” goals advocated by urban planners and politicians should be rethought, and provisions made for more low-density development in communities where thoughtful planning can create high-quality living and working environments without depleting municipal resources.

These thoughts lead me to the simple solution to the East-West conflict in Ottawa. Simply put, let both the originally anticipated urban lands in the West End be developed as the Algonquin/Taggart project gets started in the East. Yes, the “intensification” goals would be lowered. That may be a good thing for the thousands of people who will work from home either part or full-time in the future.