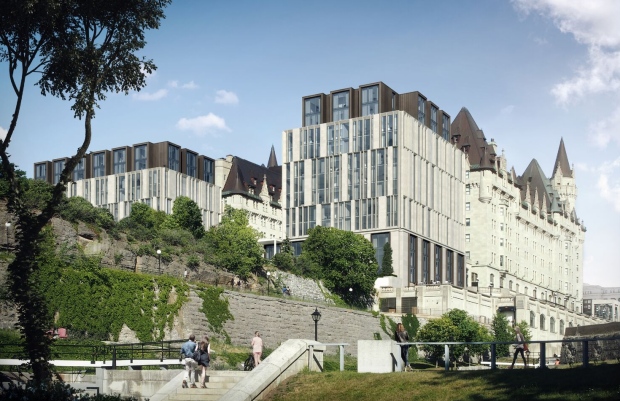 A proposed expansion of the venerable Chateau Laurier Hotel, which hasn’t seen a significant change in its exterior appearance in more than 50 years, has received a less-than-welcome response from the public.

Larco Investments, which bought the hotel two years ago, issued a news release with renderings demonstrating how it would move the parking garage underground and add up to 200 more rooms with a Peter Clewes–designed expansion, not expecting what CBC describes as inciting “fury online.”

“The intent is to build new long-term stay suites, create a new exterior courtyard off the ballroom for seasonal use and replace the aging five storey parking structure with an underground parking facility, all under the management of Fairmont Hotels & Resorts, the luxury brand that operates the hotel,” the news release says.

“The addition will offer a modern interpretation of the heritage character of the Château with a vocabulary of Indiana Limestone, glass and copper. The separated wings, massing and set back upper floors are compatible with the Château’s existing roofscape silhouette, providing a dignified and deferential response to this iconic building,” the announcement said.

“I want to highlight the openness of the Fairmont Château Laurier team of consulting and engaging with the community, the city and partners like the NCC to make this project a success,” Rideau-Vanier ward Coun. Mathieu Fleury said in the news release. “It is an exciting project that introduces captivating architectural design to this important site for our capital city, while highlighting its important heritage value and location near the Parliament Buildings, Major’s Hill Park, as well as the ByWard Market.”

If the immediate reaction is an indication, however, the plans will need major changes before they are implemented. Ottawa Mayor Jim Watson tweeted: “This falls under the category “back to the drawing board!”  Even Coun. Fleury expressed regret, saying that he wouldn’t allow himself to be quoted in promotional news releases again.

Asked by CBC to expand on his thoughts, Watson said he doesn’t think the modern design of the addition blends well enough with the old hotel.

“Well I’m not all that impressed with [the design], to be perfectly honest. The Château Laurier is an iconic heritage property in the downtown core, and the images that I’ve seen really don’t blend well, in my opinion. And I’ve heard an awful lot of feedback, most of it negative, from the public. My hope is that we reach some compromise, as we always try to, between the developer, the NCC, the city and the public,” he said.

“We have to approve, obviously, the plans, as does the NCC, and I sit on the board of the NCC now. It’s important that these kinds of developments blend in and are compatible … and I don’t believe the images that I’ve seen create that kind of blending between old and new.”