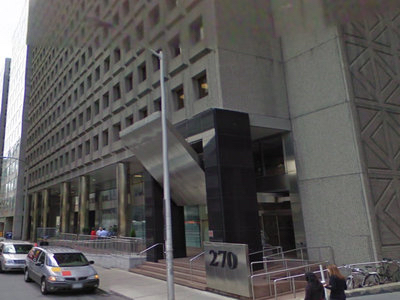 “Projects like 270 Albert set a strong example of leadership in action,” Mark Hutchinson, CaGBC’s vice-president of green building programs, said in a statement. “They demonstrate how LEED v4 is providing project teams with a rigorous set of requirements and guidelines that, when successful, can lead a 40-year-old building to become a top-performer, saving energy and thereby reducing carbon and combating climate change.

“As Canada ramps up efforts to meet emissions reduction targets, this first LEED v4 certified commercial project is a great demonstration of how our existing buildings will play a key role in the fight against climate change.”

“While the multi-tenant building was already operating efficiently when an energy audit was conducted in 2013, with this LEED v4 Gold certification the operations team was able to improve the building’s energy performance by a further by 25 per cent, resulting in an energy use intensity of 20 ekWh/sf and an ENERGY STAR score that placed the building in the 91st percentile amongst its peers,” the CaGBC news release says. “Crediting its close partnership with LEED consultants WSP Canada, Blackwood Partners also says the entire project – from initial planning to performance verification and documentation – was completed in just over one year.”

There were also 70 new certifications between July 1 and Sept. 30, with the cumulative total of LEED certified projects across the country at 2,854.

Additionally, LEED v4 registrations grew in the third quarter of 2016, for a total of 32 registrations and two certifications in Canada by the end of Q3. This number will continue to grow with registration under the LEED 2009 version of the rating system ending on Oct. 31, 2016.

Year-to-date-totals (to September 30, 2016) by LEED certification level are as follows.

In addition to 270 Albert Street, other projects of note that earned LEED certification during the third quarter include:

A searchable LEED project database with further detail on all LEED certified projects in Canada, including project scorecards and photos, can be viewed on the CaGBC LEED Project Profiles webpage.

OCOT’s apprenticeship review ratios: 8:1 for reductions, in favour of employers