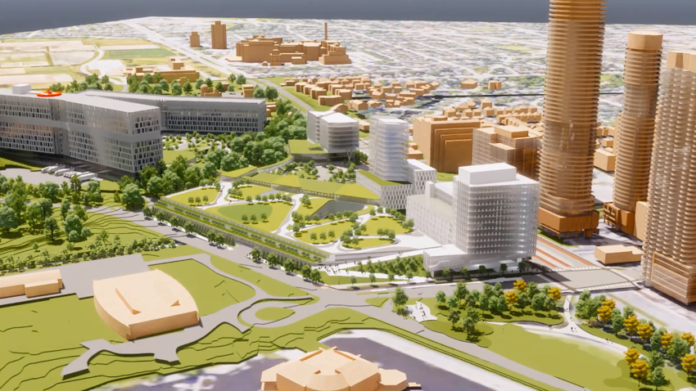 The Ottawa Hospital has launched the largest fundraising campaign in the city’s history — a $500-million “Campaign to Create Tomorrow.”

While the New Campus Development on Carling Avenue is perhaps the best-known aspect of the campaign, the hospital has announced that funds will also go towards expanding the hospital’s leading-edge research capabilities.

For those who rely on The Ottawa Hospital, this comes as good news.

“While I received exceptional care when I arrived at the Trauma Centre in 2010, I quickly learned how outdated the Civic Campus had become,” said Bushra Saeed-Khan, a federal employee who was critically injured while on assignment in Afghanistan and spoke at the launch. “The Ottawa Hospital team gave me my life back and now it’s time to give them the state-of-the-art campus they need — a building that will allow them to care for patients into the future. It’s time to make this a reality.”

Saeed-Khan’s life changed forever when an improvised explosive device (IED) detonated on a routine patrol near Kabul. Her injuries were so complex that as soon as she was stabilized, she was airlifted back to Ottawa for specialized treatment.

A team of surgeons, rehabilitation specialists, and psychologists not only saved her life, but they also restored her quality of life through nearly 50 surgeries, including the amputation of a leg, and years of intensive rehab — both physical and emotional.

In recent years, Saeed-Khan has had cause to return to the hospital on a happier occasion — the births of her two children. She says the experience reminded her of the high level of care at The Ottawa Hospital, but it also highlighted the limitations of the nearly 100-year-old building.

“Near the end of my pregnancy I had to switch to a wheelchair, so my care team worked to make sure I had an accessible birthing room with a doorframe wide enough for my wheelchair and a bed that could be lowered, so I could more easily get in and out,” Saeed-Khan shared.

The Ottawa Hospital says universal accessibility is one of the reasons a new building is necessary. The New Campus Development will exceed Ontario’s Health Care Accessibility Standards, with features like all the washrooms being universally accessible and movement into and inside the building facilitated by enclosed walkways, escalators, and moving sidewalks.

Other design principles include sustainable design and a strong focus on inclusivity and diversity in recruitment and care.

Of their $500-million goal, Tim Kluke, president and CEO of The Ottawa Hospital Foundation, shared that $216 million has already been raised.

“A transformation like this doesn’t just happen. For more than a decade, we’ve pushed the boundaries of healthcare and research, we’ve embraced innovation in every form, and we’ve written the book on patient-focused care in Canada.  We’ve quietly assembled many donors and community leaders who are standing proudly behind this project to advance our vision for a new hospital and world-leading research,” said Kluke. “Our donors, volunteers, and staff have enthusiastically embraced this opportunity to be part of one of the most important community projects in our lifetime, a legacy we’ll leave for future generations.”

The campaign’s chair and major donor Roger Greenberg — executive chair of Minto Group and prominent local philanthropist — echoed Kluke and Saeed-Khan’s sentiments about the importance of the new hospital. With the launch of the campaign, Greenberg announced he, his five siblings, and his cousin have donated $25 million, the single-largest healthcare donation in Ottawa history.

“It is an incredible opportunity we’ve been given to help so many through our philanthropy,” said Greenberg. “We, along with the generosity of so many others in the community, will completely transform how our children, grandchildren, and great-grandchildren living in the Greater Ottawa area will be cared for. No one else will do this for us. It’s our turn. It’s our time.”

“There was a time when no one knew what kind of future I would have, or if I would ever be able to have children because of the damage to my abdomen in the blast,” said Saeed-Khan. “But now, when I look at my two small children, I know we owe them the healthiest future we can give them. They deserve the very best care.”

Ella Myers writes for The Ottawa Hospital Foundation, which submitted this story.