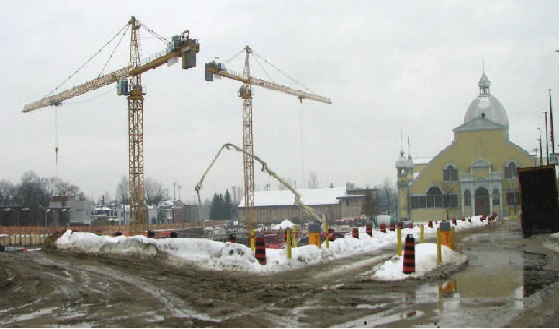 Lansdowne Park is a 40-acre sports, exhibition and entertainment facility in Ottawa, Ontario. The park, owned by the City of Ottawa, is being revitalized by Ottawa Sports and Entertainment Group (OSEG).

Construction at the park has been progressing since October 2012. The revitalization planwas announced in October 2008.

The plan, initiated in part from the OSEG’s success in being awarded a Canadian Football League expansion franchise on the condition that the Frank Clair Stadium be renovated, led to a proposal to redevelop the entire site in a public-private partnership with the City of Ottawa.

Several months prior, Senators Sports & Entertainment (SSE) had also put forward a plan to build a soccer-specific stadium in Kanata to house a major league professional soccer franchise.Through the early part of 2009, the merits of both projects were debated, council heard input from the community and local politicians, and late in the year, Ottawa City Council voted to go ahead with the OSEG proposal and began narrowing down a final design.

Pomerleau was selected by OSEG to oversee most of the construction.The redevelopment will reduce asphalt on the site from 26.8 acres to 1.8 acres ofaccessible pathways and increases sidewalk area from 35 meters to 7.2 kilometers (km). It increases park space from six acres to 18.5 acres and raises the number of trees from 230 to 880.

The number of possible event spaces will be increased from four to 20. There will be a kilometer of benches and seating walls.The design includes the needed stadium upgrades, a new parking garage and a 360,000 sq. ft.mixed use building with retail stores, 280 residential units and offices.

The design includes the needed stadium upgrades, a new parking garage and a 360,000 sq. ft. mixed use building with retail stores, 280 residential units and offices.

Prime mechanical contractor X-L-Air Energy Services Ltd. and its sub-trade HydroPlumb Mechanical Ltd. has supported the value-engineering process from the project’s earliest stages and worked with Pomerleau on the parking garage and north and south stands.

Darrin Alberty to be 2020/21 NCHCA president