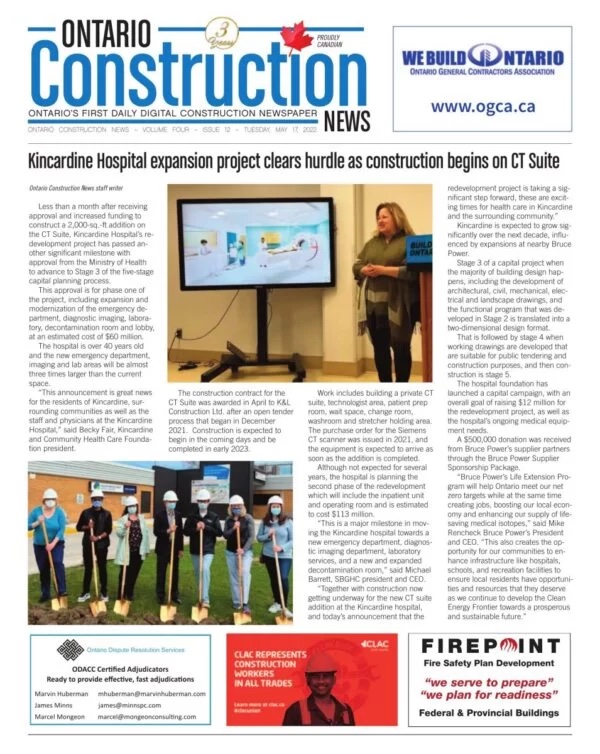 It’s been three years since we launched the sister publication to Ottawa Construction News, with the same OCN acronym. Ontario Construction News has succeeded in breathing some competition into the province’s construction news industry, and allowed me to fulfill a lifetime dream of publishing a daily newspaper.

When I started my career as a journalist while at university in the early-to-middle 1970s, my first dream was to write for a daily. That happened quickly enough when I snared a part-time job as a police reporter at the Vancouver Province.

After graduating in 1976, I set out on a few years of travel and adventure, celebrating my 27th birthday in Monrovia, Libera, a week after a military coup in the West African nation. I had worked for 18 months as a sub-editor on the Bulawayo Chronicle, living through the transition from Rhodesia to Zimbabwe, filing stories to Canada for the Southam News agency.

The Liberian story, filed by telex the day before I returned home to Vancouver, would be my last experience with live journalism until I started this business in 1988.

Yes, owning a specialized construction news publishing business certainly provided to be much more enjoyable for me than pushing press releases around for a federal government department. But monthly cycle publications, like this one, lack the daily adrenalin challenge of daily news publishing.

The new Ontario Construction Act, and its provision allowing for the publication of Certificates of Substantial Performance (CSP) and other legal notices in electronic publications, gave us the economic framework to start the business, but we still needed to build systems and capacity to handle the immediate and daily publishing cycle.

There have been harrowing and challenging moments, but the daily newspaper has succeeded. We’ve developed the capacity to handle urgent and breaking stories (such as the triennial ‘strike season’) and fill the pages with news on less-exciting days.

I’m certainly lucky to regain the joy and challenge of daily journalism, and am thankful for the team working on this project, who I expect will have an ownership stake in the business within the next three years.

Salary or dividends: What does a business owner do?