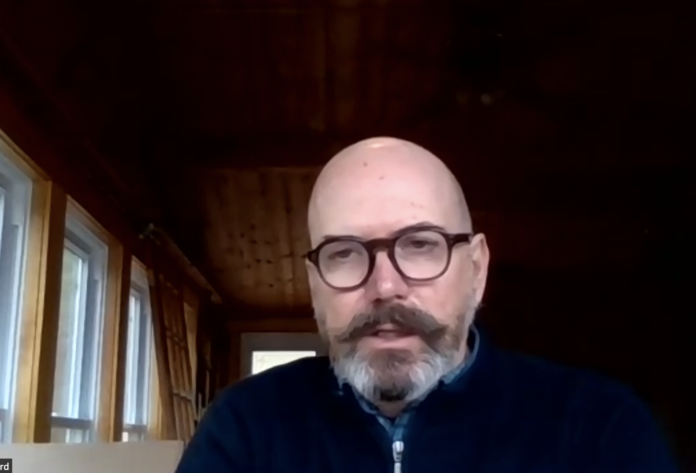 Factory-built mass timber projects provide a cost-effective and environmentally-friendly option for developers and builders, and are rapidly finding applications in many new sectors, says the founder of manufacturer Element5.

The business, which recently opened a 137,000 sq. ft. plant in St. Thomas in western Ontario, is leading the way in what Patrick Chouinard describes as a “Mass Timber Revolution.” Element5 also operates an innovation/research site near Ottawa in western Quebec, where it develops and enhances its wood products for a diversity of residential, institutional and commercial markets.

Speaking in April at an online presentation co-ordinated by the Construction Specifications Canada’s Ottawa chapter, Chouinard, who is the company’s vice-president of business development, says mass timber reduces construction time and costs, stores rather than emits Carbon Dioxide, improves living and working conditions and is exceptionally durable – with building lifespans expected as long as 100 years.

He said the Mass Timber revolution began in Europe about 30 years ago and is now rapidly spreading across North America, with several manufacturers in both eastern and western US and Canada. Element5’s Ontario location – with relatively close access to Northern Ontario forest product providers – allows it to be competitive in much of the continent.

Mass Timber “is characterized by buildings that are prefabricated off site, and are shipped to site where they’re assembled, rather than constructed in the traditional sense,” he said.

In the Mass Timber building model, contractors prepare the site and dig the foundation, and then the manufactured timber products are delivered and hoisted by cranes, dramatically reducing on-site construction times, while ensuring quality consistency.

As an example, Chouinard described an affordable four-storey housing project for the Kitchener YMCA. The building will house 41 single women at risk of homelessness in their own apartments – and work will be completed by the end of the year, even though the winning consortium won the job only recently. The group won the job on price and delivery time in a competition with six bidders.

While the Ontario Building Code still restricts mass timber buildings to six stories, Chouinard expects the province will soon follow the lead of British Columbia and other jurisdictions and adopt the National Building Code of Canada’s  new provisions which and allow permit Encapsulated Mass Timber Construction (EMTC) structures that are up to 12 storeys or more.

The mass timber performs exceptionally well in fire conditions, charring slowly and maintaining strength enough thickness into the structures so that, even with an hour of charring, they remain intact, allowing for a safe evacuation of occupants in a fire event, while preserving the building’s structural integrity. As well, fire safety concerns over the increased height were resolved with the encapsulation requirement, a solution that increases its inherent fire resistance.

As for the environmental advantages, “the concrete and steel industries are responsible for about 12 to 14 per cent of the world’s carbon dioxide,” Chouinard said. “When we’re building with wood, we’re reversing the carbon dioxide problem – we’re leveraging the world’s forests in order to absorb carbon dioxide, producing produce the oxygen we breathe, and storing store the remaining carbon in ever-increasing amounts of wood.”

Chouinard said Element5 has been able to manage rapidly rising COVID-19 pandemic wood costs through its well-established relationships with Northern Ontario wood producers.  Element5 can purchase and stockpile lumber near the end of the season, when prices are lower.  He estimates the company can purchase its wood for about “40 per cent less than what others can buy it for, so that helps us to keep our prices down.”

Business advice: What do do about rotten apples?