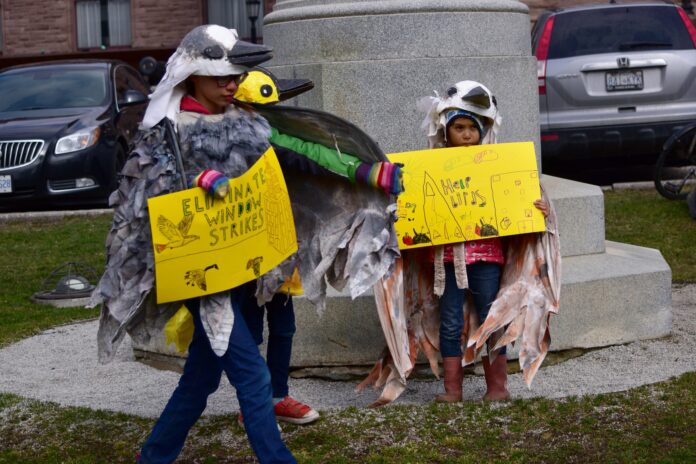 “A few municipalities such as Toronto have adopted bird-friendly guidelines or requirements, but this piecemeal approach does not go far enough to protect migratory birds across the province,” FLAP said in a statement. “Today, most new buildings constructed in Ontario use materials that are unsafe for birds, and thus contribute to an already widespread risk of collisions.”

In 2019, the Ontario government sponsored development of a national CSA standard for bird-friendly building design and advocates are urging the next government to adopt and implement the standard.

More than 20,000 signatures have been collected on a petition urging the government to approve new building standards.

“To help birds see and avoid windows, bird-friendly materials (e.g. fritted glass, window films) can be incorporated into the design of new buildings,” the petition states. “However, these solutions will not be implemented effectively province-wide unless they are required by law.”

FLAP Canada estimates 25 million bird deaths occur each year in Ontario due to bird-building collisions and advocates are warning about promises from all political parties to build 1.5 million homes over the next 10 years. Enshrining bird-friendly design concepts would minimize the impact on the bird population.

“It’s simple, it’s effective and, quite frankly, the cost is proven to be quite negligible,” said Michael Mesure, the organization’s executive director.

Guidelines suggest using glass that’s more visible to birds, especially on corners, and advise against glass-covered passageways like the one at Ottawa city hall and the National Gallery of Canada. They also suggest reducing interior lighting during fall and spring migration periods and creating bird-friendly landscaping.

Advocates want regulations for all new construction “like development applications include shadow studies.”

New Democrats and the Green Party of Ontario have agreed to implement the measures should they take office, however, according to recent polls, the PC government is expected to win tomorrow’s election and Doug Ford has pledged to lower bureaucratic hurdles for developers.

Advocates say they’ll keep pushing to get the issue the attention they believe it deserves in an election that’s been dominated by housing and the high cost of living.

Nature Canada developed its Bird Friendly City certification over the past year to encourage Canadian municipalities to become safer and better places for birds.

“Through the certification, not only do we want to provide a framework where cities can implement policies and actions to reduce those losses or to reverse those declines, but we also want to celebrate cities that have reached a level where they are doing their part in protecting bird populations,” said Nature Canada’s Urban Nature Organizer Aly Hyder Ali.

London was one of the first Canadian cities, along with Vancouver, Toronto and Calgary, to create policies that meet the certificate’s three categories: threat reduction, increasing and protecting its natural habitats, and community engagement and education.