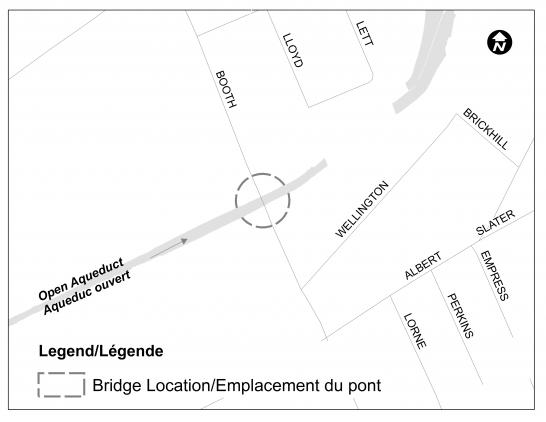 An historic Ottawa bridge dating back to 1873 and spanning an aqueduct is due for renewal this year, as the city has deemed it to be in need of repair.

The Booth Street Bridge, a designated Ontario Heritage Structure, is a single-span stone arch bridge. This project will take place under the new Booth Street Overpass, between Albert Street and the Sir John A. Macdonald Parkway. It’s expected the design assignment will be completed this winter, with renovation work beginning in the summer. A budget of $1.8 million has been approved for the project.

A study of the Booth Street historic bridge included analysis for repair, renovation or replacement of the bridge. The City undertook a Municipal Class Environmental Assessment (EA) Study to evaluate and identify reconstruction/rehabilitation alternatives for the bridge.

The study included public and agency consultation, an evaluation of alternative solutions, an assessment of the impacts of the proposed alternatives, and selection of the preferred solution.

A structural assessment of the bridge conducted in 2018 found serious flaws. With the bridge no longer serving as a crossing for vehicular traffic over the aqueduct, the City began considering options to renew it as a pedestrian/bicycle link, as well as for maintenance vehicles.

The bridge features a central original arch, which was constructed in 1873. The bridge was widened sometime between 1889 and 1910. It was originally part of the Ottawa Water Works, which included open aqueducts, pump stations and bridges. A Cultural Heritage Evaluation found the bridge to be of historical significance.

The aqueduct connects to the Ottawa River and is thought to function as a habitat for a variety of fish, including rock bass, carp, and channel catfish. Because of urbanization, the site doesn’t have much in the way of a natural system, the city explained through display boards at a public meeting.

What vegetation that does exist there is limited to the hedgerow type, including staghorn sumac, honeysuckle and European buckthorn. Some mature willows and Manitoba maples are in proximity of the bridge. Animals found in the area include species that thrive in urban environments, including raccoons, skunks, and pigeons.

Four options were presented, including one that suggested doing nothing, and fencing off the area due to state of disrepair. The third option was the preferred one, which called for reconstruction of the bridge to its original 1873 geometry.