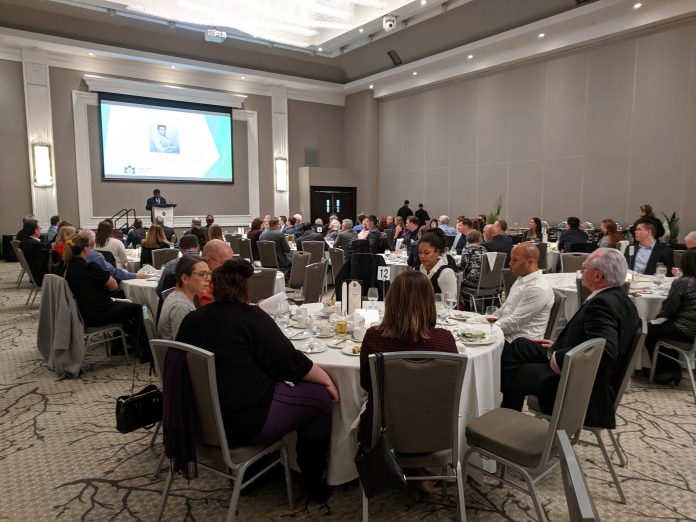 The Greater Ottawa Home Builders’ Association (GOHBA) recognized individuals and companies for their contributions to the industry and association at its annual general meeting on March 10.

Pierre Dufresne, vice-president of land development at Tartan Homes and a former president of the Ontario Home Builders’ Association (OHBA), received the association’s Colonel Boss Award for his outstanding dedication and service to the association.

As well, renovation contractor Amsted Design Build received the Fred Nielsen Award for it’s outstanding and lasting contribution to the association and the housing industry,” and Urbandale Construction was awarded the Enbridge Hall of Fame Award, granted to a company or individual who has made extensive contributions to the association/industry and has been a member more than 20 years.

Coleman described the CHBA’s lobbying efforts on behalf of the industry, focusing on housing affordability – that is, ensuring home ownership remains accessible for middle-income Canadians.

She said the association was successful in highlighting the affordability issue in the recent federal election campaign. Coleman said measures include increasing the amortization level to 30 years for first-time home builders, and working to ease the pressure of the current mortgage stress test requirements to make them more “dynamic” and basing it on “current contracted rats.”

The changes, she said, would increase borrowers’ purchasing power by about 5 per cent “and therefore bring back some 20,000 first time homebuyers back into the market that were previously knocked out.”

She said the CHBA also believes that the stress test should be lowered for longer-term mortgages.

“So, if you lock into a longer term mortgage we would like to see a lower stress test percentage applied, even down to nothing on 17 years,” she said. “This would not only open the door to more home buyers; it would encourage them to opt on for longer fixed rate loans, reducing risk for both them and their lenders.”

As well, a new interest free loan program for as much as $40,000 per household to improve the energy performance of their homes will benefit the renovation industry, she said.

Meanwhile, Bob Schickedanz described the OHBA’s efforts to mitigate potential problems with new Community Benefits Charges (CBC). The government released its proposed framework on Feb. 28 and there is a final commenting period until March 30.

“Our OHBA has been supportive of a broad CBC framework,” Schickedanz said. “The objective is for greater transparency, certainty and above all, fairness.”

However, there are problems in the way the proposed charges are planned. These include how the charges are calculated (upwards of 15 per cent) and the benefits for which these can be used including libraries, long term care, parks, public health, and recreation facilities, which provide benefits to the entire community, not just residents of new developments and subdivisions.

The OHBA believes there is a need for a different approach and calculation methodology between high-rise structures and low-rise projects. Another concern is that the charges would be based “on a percentage of land value at the time of pulling a building permit.”

This may be appropriate for high-rise structures, but is a challenge for subdivision developers who “have put millions of dollars of infrastructure into the ground, effectively giving a boost to the land value at the permit stages.”

“We need a definitive, rigorous and robust structure regarding the eligibility of services that can be funded by the CBC to, again, ensure fairness.”

Schickedanz urged members to speak out and participate in the CBC discussions as the impact of the new charges on top of current development charges members are already paying could be significant.

“There are numerous other regulations, in particular with respect to the Ministry of the Environment,” Schickedanz said. Challenges include conservation authorities, species at risk, environmental assessments and environmental compliance approvals for stormwater management.

Schickedanz also said the OHBA is monitoring changes to Ontario’s home warranty program, with changes to the Tarion’s structure and authority.

“We hope to make the dream of home ownership a reality for all homeowners,” he said.