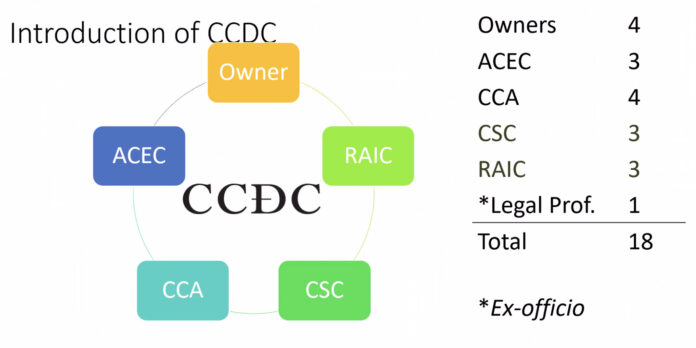 A new CCDC-2 standard form contract for stipulated price contracts will address some concerns and confusion about the long-established forms, and introduce new features, including a “Ready-for Takeover” project closeout provision.

Thurston and construction lawyer Geza Banfai (who is a member of the drafting Canadian Construction Documentation Committee – CCDC), outlined the updated contract last week at a virtual workshop co-ordinated by the Ontario Public Buyers Association (OPBA). OPBA represents procurement officials at municipalities and other public agencies throughout the province.

Banfai said the new and previous 2008 contract forms will both be valid until the old form is withdrawn at year’s end.

The CCDC-2 form is the most popular and widely-used construction contract document in Canada, with about 15,000 uses per year. (Users need to purchase a seal from the CCDC to comply with copyright law.)

“We’re very unique in Canada,” Thurston said. “We’re one of the very few jurisdictions that has standardized contracts, as well as a law system designed for the procurement of construction.”

Thurston said the one of the most noticeable changes in the new CCDC-2 document is the “Ready-for-Takeover” provision.

This provision covers aspects of the project that need to be resolved after substantial performance is achieved. In Ontario, substantial performance occurs at a point when approximately 97 per cent of the project’s value is completed – but there are still unfinished aspects and these have often been outlined contractually in supplemental conditions in the older CCDC document.

The revised contract says “the prerequisites for attaining Ready-for-Takeover of the Work are limited to the following”:

However, holdback payment remains tied to the substantial performance requirements, not Ready-for-Takeover.

Thurston noted that there can be areas for confusion, which will require additional clarification. For example, if part of a building is partially occupied and it requires an air conditioning unit that serves the entire structure, should the entire warranty “start date” for the air conditioning equipment be the early occupancy date?

Another new contract feature is the introduction of “Division 01 – General Requirements.”

The new standard form contract also makes clear that the obligation to make payment is subject to any payment legislation, which overrides obligations otherwise prescribed by the CCDC 2 – 2020.

The new contract mirrors payment timelines in Ontario’s Construction Act – namely the requirement for the owner to pay within 28 days of submission of a Proper Invoice. As well, if an owner fails to pay upon an adjudication, this is “now a ground for default”.