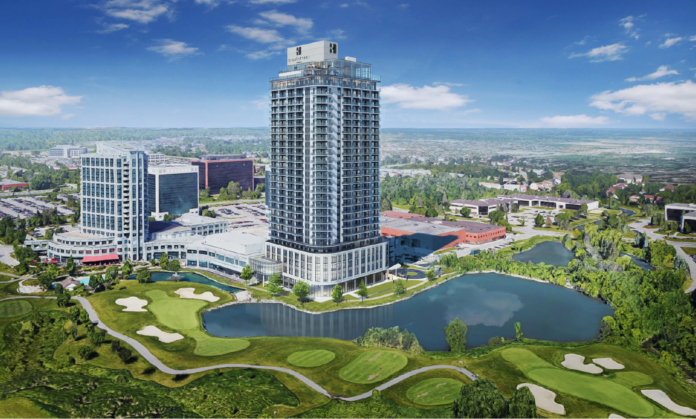 Two significant projects in Kanata are moving closer to construction after the city’s planning committee gave them the go-ahead, with final city council ratification on Wednesday. As well, a major redevelopment at Bank and Riverside (Billings Bridge) is moving forward.

The planning documents don’t report on the projected project costs.

In the first, Brookstreet Hotel owners Wesley Cover International are preparing to build a 30-storey apartment building with a restaurant on a new parcel to be created from 525 Legget Dr. and 359 Terry Fox Dr., east of the exiting hotel and parking structure.

The proposed structure designed by NEUF Architects will primarily be 253 apartments, but it will include an extension to the existing hotel ballroom on the second floor, with a balcony overlooking the adjacent Marshes Golf Course and ponds, and a ground floor patio space adjacent to one of the ponds, according to planning application documents.

The committee also approved a proposal from Nokia Canada to relocate their existing office complex on Terry Fox Drive the southern end of the site and to redevelop the remaining lands. The overall concept includes an office building that has a low-rise base with four-storey and 10-storey towers extending above.

The plan also shows 11 potential future towers, between 13 and 29 storeys each, with and podiums between six and eight storeys, as well as park space and an urban plaza.

As well, a new 500,000 sq. ft. office and lab complex would include retail and commercial stores at its base, and two office towers.
Gensler has developed the plans for the redevelopment at 570 and 600 March Rd.
In other business, the committee approved Official Plan and zoning amendments to permit a 29-storey residential high-rise and a 27-storey mixed-use building southwest of  Bank Street and Riverside Drive North in the area currently occupied by the Billings Bridge shopping centre.

The proposal would introduce new commercial space along Bank Street, and a public plaza proposed at the northeast corner of the property would offer amenity space to the entire community.            The applicant has expressed interest in an agreement with the city to address issues of concern among area residents, including housing affordability, the city reported.

Parking will be located primarily below grade with a two-level garage that serves both buildings (292 vehicle stalls: 21 surface, 271 below grade), as well with 283 bicycle spaces. The northeast corner of the site will contain the urban parkette framed by the Bank and Riverside North intersection, which  will function as a privately owned public space (POPS)..
Hobin Architecture has designed the project for the owner Capital City Shopping Centre Ltd.