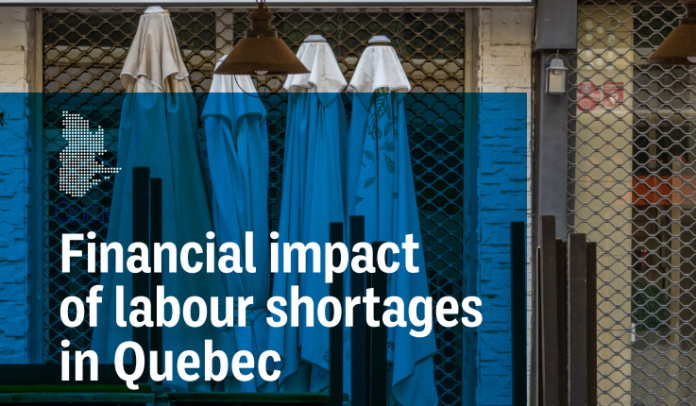 The construction and professional and administrative services sectors have losses in excess of $2 billion. Also, construction industries don’t have access to the small business deduction (SBD), which severely limits their ability to get through this crisis.

“We knew the labour shortages were having a very negative impact on small business owners, who have to work longer hours, as do their employees, and are forced to turn down contracts and business opportunities,” said François Vincent, CFIB’s vice-president for Quebec.

“Today, we can put a figure on the losses suffered by small businesses: nearly $11 billion in one year! They could have used that money to recover, grow and boost their regional economies. The worker shortage is very bad news for small business owners.”

Lack of personnel is cited by 86% of Quebec SME owners as the most difficult issue to overcome in 2022, just after rising costs (energy, inputs, etc.), which were mentioned by 87%. This is a major problem that generates additional costs for small businesses, as one of the primary effects of labour shortages is to drive up wages.

CFIB’s estimate is based on data from a survey conducted in March. Losses incurred by small businesses were calculated using the average total revenue of a Quebec small business published by Statistics Canada for the year 2020, by sector of activity. It should be noted that the analysis only considers businesses with revenues between $30,000 and $5 million.

“While the loss of sales and contracts is significant for small business owners, it’s important to note that it doesn’t necessarily mean a net loss to the province’s economy.

The uninvested amounts may have been injected into different projects or may represent other expenses for small businesses, and the lost customers may have spent their money in other ways in Quebec. Nevertheless, the shortfall comes at a very bad time after two years of a pandemic that has weakened and indebted too many small businesses,” said Laure-Anna Bomal, CFIB research analyst and author of the report.

In December 2021, CFIB developed a series of 12 recommendations for helping small businesses cope with demographic challenges, mitigating the impacts of the pandemic, and correcting mismatches in the labour market. In addition, it has repeatedly called on the Quebec government to address small businesses’ most pressing demands to help counter the labour shortages:

“The Quebec government has adopted many measures to support businesses looking for employees and has just made changes so that all small businesses have access to tax credits to attract workers,” Vincent said.

“CFIB will work to raise awareness of the programs that exist for SMEs. That said, more can and must be done to help them, particularly in terms of taxation, since Quebec has the highest tax rate in the country.”