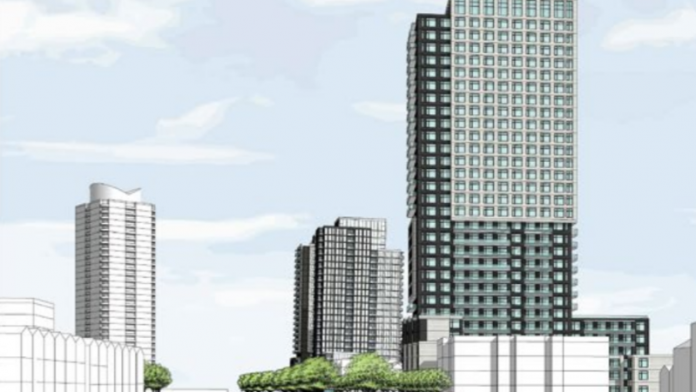 Surface Developments has filed plans for a 30-story mixed-use tower in Ottawa’s Westboro neighbourhood. If approved, the proposed highrise will have more than 350 apartments and about 2,500 sq. ft. of ground floor retail.

The planned building would have an underground parking garage with 204 parking spots and 292 bicycle spaces. There would be a mix of studio one-and two bedroom units.

There are currently five buildings on the site, all of which would be demolished. These include a three-storey apartment building at 295 Ashton Ave., a detached home at 301 Ashton and a duplex at 299 Ashton, as well as two single-story commercial structures at 2046 and 2050 Scott St.

The proposal “reflects the evolution of Scott Street from an auto-oriented, low-rise area to that of a mixed-use, transit supportive corridor with high density uses located closest to the transit station,”  consultants Fotenn Planning + Design say in documents filed with the city.

Ottawa Business Journal reports that the area is already home to several existing and under-construction high-rises, including the 31-storey Metropole condo building, the 24-storey second phase of Colonnade Bridgeport’s mixed-use development at Scott Street and McRae avenue as well as a proposed 26-storey project across the street at 320 McRae Ave.