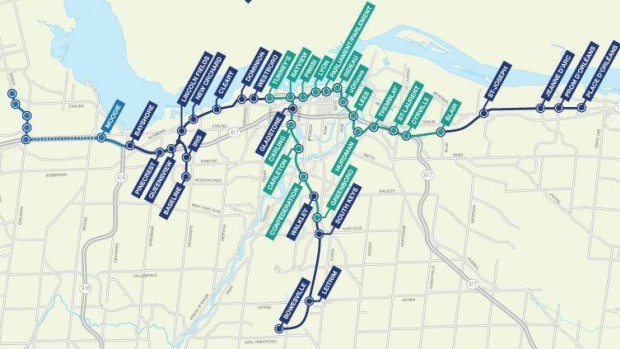 The provincial government has announced it is committing more than $1 billion toward the City of Ottawa’s Light Rail Transit (LRT) expansion.

The Stage 2 LRT project will add 30 km, of new rail and 19 new stations, extending the LRT network to the east, west and south.

Ontario’s funding commitment will also help support the capital costs of two additional extensions: a spur to the Ottawa Macdonald-Cartier International Airport and an extension to Trim Road in Orléans. These will add 6.5 kilometres of new rail and three stations. Construction on Stage 2 is expected to start in 2018, once the Stage 1 Confederation Line is completed. Stage 2 is expected to enter service in 2023.

Ontario’s funding for Stage 2 is part of the largest investment in public infrastructure in the province’s history — $160 billion over 12 years — for projects such as roads, bridges, transit systems, schools and hospitals. The planned investments would support 110,000 jobs on average every year across the province. In 2015, Ontario announced support for more than 325 projects that will keep people and goods moving, connect communities and improve quality of life..

The provincial government’s  news release said it has already committed up to $600 million towards the Stage 1 LRT project, the Confederation Line — a $2.1 billion project that is jointly funded with the Government of Canada and the City of Ottawa.

Stage 2 will extend the Ottawa LRT network to the east from Blair to Place-d’Orléans Station; to the west from Tunney’s Pasture to Bayshore Station and southwest to Baseline Station; and to the South from Greenboro Station to Bowesville in Riverside South.

The provincial support, including the funding for the Airport spur line and Orleans extension, brings the enhanced LRT expansion half-way to completion funding. The federal government is expected to provide the balance.

The Ottawa Citizen quoted Leslie as saying he’s working on getting the federal government to pay for the other half. Both Wynne and Prime Minister Justin Trudeau campaigned on promises to spent massively on new public construction projects. Watson said the city is meeting federal ministers and expects them to agree to pony up within a few months.

Construction is expected to generate nearly 24,000 person-years of employment, or nearly 1,000 full-time jobs.