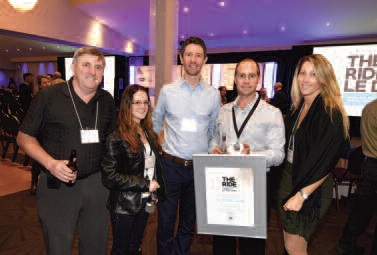 BY SARA-LYNNE LEVINE
– Special to the Ottawa Construction News

THE RIDE 2015 was brought to a successful close on Tuesday, Nov. 17 as 200 riders, volunteers, sponsors, and supporters came together for a celebration event at the Centurion Centre.

Upon arrival, attendees were greeted by white coated researchers who presented everyone with 2015 participation RIDE medals. After crossing a “finish line” into the event, guests met with fellow riders and volunteers to celebrate their achievement of raising $1.83 million for cancer research. Awards were presented to the top 19 teams and individual fundraisers who raised more than $10,000.

The top individual fundraiser, who wasn’t able to attend the event, was OCA member Michael Caletti who raised more than $123,000. The top team, boasting 102 members and having raised $460,000, was once again The Brick Peddlers, led by Robert Merkley. Kevin O’Shea, president of Mattamy Homes Ottawa – the title sponsor of THE RIDE – assisted with handing out awards to the winners, and tried to stay neutral amongst some good-natured “trash talking” between teams Tomlinson and Merkley.

Robert Merkley, who took the stage on behalf of The Brick Peddlers, spoke earnestly about how everyone in the room is touched by cancer and how raising money for cancer research is making a very real difference in the lives of loved ones. The smiling and effusive crowd enjoyed catching up with friends, snapping pics at the event photo booth, the appetizers and drinks, and learning about next year’s event which is set to take place Sunday, Sept. 11, 2016.

The 2016 edition offers two routes: A 50 km closed route looping the Sir John A. Macdonald Parkway and a separate 108 km route starting at Tunney’s Pasture and taking participants west to the Dunrobin area and then back to Wesley Clover Parks. Riders will then be shuttled back to Tunney’s Pasture for the closing celebration.

Mattamy Homes returns again as title sponsor for the event. “We are proud of our partnership with The Ottawa Hospital. Our sponsorship of THE RIDE is a way to say ‘thank you’ by supporting the causes that mean the most to our Ottawa homeowners – in this case, cancer research at The Ottawa Hospital,” said Mattamy Homes Ottawa’s Kevin O’Shea.

They are already conducting groundbreaking genetic research to map the pathways of certain cancers and develop personalized therapies; and in fact, more than 200 cancer related clinical trials are currently underway.

Registration is now open for the 2016 event and details about the route, event day and getting started can be found at DoTheRide.ca. You can also call Rider Relations at (613) 798-5555 x 19832 or events@toh.ca if you have any questions. More information at DoTheRide.ca.

Sara-Lynne Levine is marketing and media relations officer for The Ottawa Hospital Foundation.