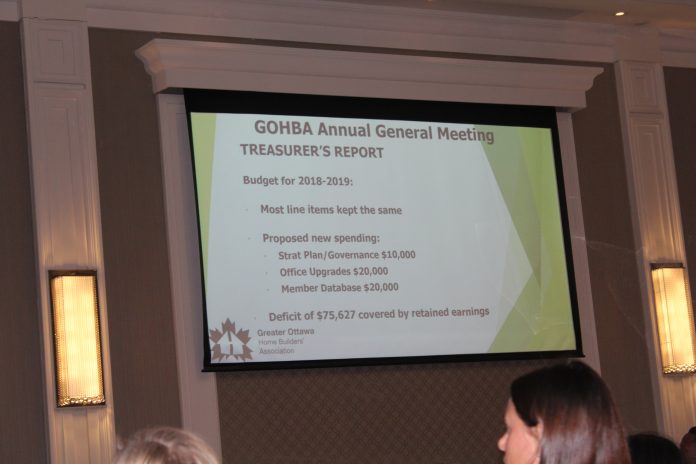 Roy Nandram of RND Construction took the helm as the Greater Ottawa Home Builders’ Association (GOHBA) president at the association’s annual general meeting on April 16, assuming the responsibilities for a two-year term from Josh Kardish of eQ homes.

In passing the gavel, Kardish described the association’s significant changes in the past year, including the selection of Jason Burggraaf as its new executive director, as the association embarked on a thorough strategic plan review, which it is now implementing.

The review “contains active milestones” and includes measurement and tangible indicators, including initiatives to improve housing affordability and choice, and the introduction of a new “industry human resources, education and training committee” to deal with labour shortage issues. Kardish said he will lead this committee as it is established.

The associations’ financial numbers for the fiscal year ending Oct. 31, 2018 showed a $52,794 deficit and the 2019-10 budget shows a further significant operating deficit. “We’re working with a new adviser to develop an investment strategy” for the association’s reserves, Kardish said.

However, the association’s overall financial health is still solid, in part because the losses last year and projected for this fiscal year were offset by a $187,804 gain in the 2017-18 fiscal year.  Overall, the association had $1,454,572 in net assets at the end of the last fiscal year.

In taking office, Roy Nandram described his childhood in Guyana, and how he got his start as an engineering student in Algonquin College, learning the basics of development and construction from mentors, setting the stage for his successful business.

In a speech, Ottawa Mayor Jim Watson outlined the city’s opportunities and progresss as it reaches the one million population milestone this spring.

The association awarded a rare lifetime honorary membership to Michael Martin, who led the association’s Renovation Council and advocated for the RenoMark program.