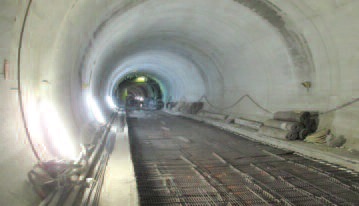 Tunneling work for the Confederation Light Rail Transit (LRT) line has resumed beneath Rideau St. about two months after a massive sinkhole swallowed a minivan and much of the roadway.

The tunnel section had almost been completed – there were just 50 metres to go – between the Rideau Station cavern and Sussex Dr. when the hole opened on June 8.

He wrote that the city, RTG and tunneling experts will be on site both above and underground, to monitor activity.

The tunnel will be mined in small bits at a time, in accordance with “the sequential excavation method.”

There are additional supports including pipe roofing, face bolts, and lattice girders to reinforce the tunnel, while systematic drainage and grouting (concrete injection to reinforce the area) will address any loose or potentially unstable ground.

Despite the work pause, Cripps says the $2.1 billion project, to open in 2018, remains on schedule.

In late July, crews installed the overlay and utilities at the Booth St. bridge, in anticipation of its reopening as early as September. In the east, work continued on the guideway between St. Laurent and Blair Stations, in preparation for vehicle testing as early as this fall, the city says.