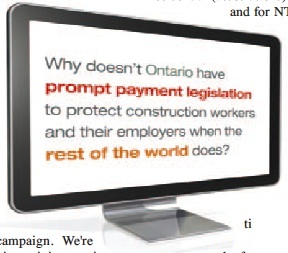 An initiative to propel Canada’s first prompt payment construction legislation through the Ontario legislature has moved into high gear. The National Trade Contractors Coalition of Canada (NTCCC) has started a $500,000 television advertising campaign and intensive lobbying to push the private member’s bill through committee and into law.

“It is a major campaign, putting pressure on all three parties, to put Bill 69 forward and make it happen when the legislature resumes on Feb. 18,” said Ron Johnson, deputy director of the Interior Systems Contractors Association of Ontario (ISCA), one of the NTCC’s member organizations.  “We’re co-ordinating an advertising campaign, an online petition – we have received some 6,000 signatures in a week or two – and an aggressive government relations campaign.  We’re working with a lot of MPPs and cabinet ministers to impart on them the importance of the bill.”

“We’re currently scoping out amendments to make the bill stronger,” he said. “The next step is to meet with affected stakeholders prior to (the bill) going to committee and then we’ll go to committee with a high level of consensus.”

A sensitive issue is how residential developers and the associations representing their interests view the proposed prompt payment legislation, which received unanimous consent when it was introduced as a private member’s bill by Vaughn MPP Stephen Del Duca last May, but has since stalled on the government’s order paper. Some municipal governments have also expressed concerns.

Reportedly, there were tensions at a meeting Sept. 19 in Del Duca’s office, attended by several stakeholders including residential developers/contractors who combine construction responsibilities with ownership – and thus are at the top of the payment pyramid. Reportedly, blunt words were exchanged between Richard Lyall, president of RESCON (Residential Construction Council of Ontario) and ISCA executive director Hugh Laird.

Roberts said there really weren’t any fundamental issues or complaints there.  “The meeting ended with a plan for residential (associations) to submit concerns or questions, and for NTCC to respond,” he wrote in an email to Ottawa Construction News.  “Was done.  Nobody has ever said they do not believe in the principles of Bill 69 including residential . . . it’s technical issues only.”

Johnson said the NTCCC may agree to amendment to Bill 69 to exempt residential renovation projects from the legislation.  This wouldn’t apply, however, to larger-scale residential developers.

One of the main sticking points and much of the controversy about the legislation appears to relate to its financial disclosure and reporting requirements.

While the Ontario General Contractors’ Association (OGCA) supports the legislation, the challenge is that many residential developers are at the top of the pecking order in the supply chain – they are the owners.  The flow-through and notification provisions apply equally and benefit both general and subtrades and suppliers, but create new obligations and responsibilities at the ownership level, without corresponding advantages, and this is where the conflict may be most severe.

Johnson says the issue here is a matter of public policy and healthy economic practices.  “The average age of receivables (for subcontractors) is 75 days,” he said.  He said delays in payment are creating true challenges for business owners, who must meet their wage bills and other expenses on schedule, but are trapped waiting for funds from general contractors (who in turn are also often waiting for money from the project owners.)

He said electrical contractors alone in Ontario “have involuntary lent $100 million a month” to owners and developers.  “We are advancing $100 million worth of short term debt because someone is not paying our bills.

“This puts us in the position of exposure to risk from anything that happens on a job.  You only need one (project) to go south, when late payment goes to non-payment, or something changes in the economy, like the dollar dropping like a stone, or there being an increase in interest rates, and the line of credit that has already become very expensive becomes insurmountable.”

The prompt payment legislation, if passed, will follow the model of similar legislation in several US states and overseas.

It sets statutory payment terms, and allows contractors and sub-trades to stop work payments are not made, ensures, prompt release of holdbacks, limits retaining amounts, requires progress payments every 31 days or less, sets mandatory interest on unpaid accounts, and (of some concern to residential owners), requires significant financial disclosure, specifically (according to a City of Toronto legal briefing on the legislation), “a requirement for owners to disclose financial information related to an improvement to demonstrate the financial ability of the owner.”

The Toronto solicitor’s report said that the Association of Municipalities of Ontario “wrote to the leaders of all three provincial parties on November 13, 2013, stating that the municipal sector is quite concerned about the Bill, and highlighting the fact that municipal governments were not consulted during its development.

“The letter points out some of the concerns with the Bill and requests that municipal governments be exempt from its requirements.”

Roberts, speaking for the NTCC, says he says that Bill 69’s advocates will work with other stakeholders on amendments to improve the draft legislation, but will press the case that changes that gut the bill’s essential qualities should not be allowed to derail its progress.

He said he believes the financial disclosure requirements and prompt payment requirements, in reducing financial costs and increasing financial security for contractors, sub-trades and suppliers, will result in lower construction costs and a more viable economy.  “Perhaps the bill might put a little more rigour into the financing process, so you don’t have half-baked projects going ahead,” he said.