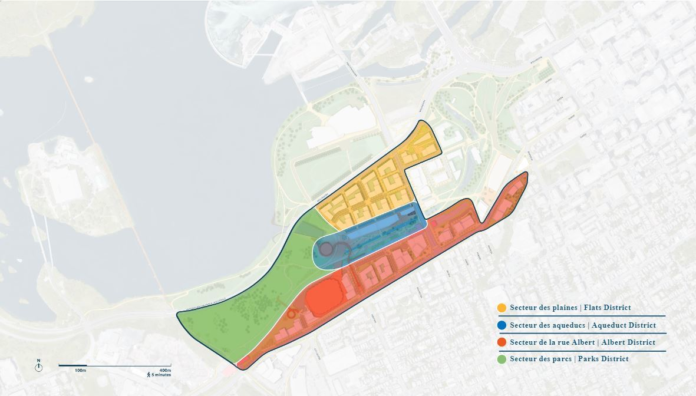 The National Capital Commission (NCC) has identified three development teams competing to build the first part of what ultimately will be a 35-year initiative to convert a 29-acre parcel of vacant Ottawa land into a comprehensive community.

The federal agency last week also outlined its concept plan for the site, a working-class neighbourhood originally  expropriated in the 1960s to build a new Department of Defence headquarters.  These plans never materialized, and the land has remained vacant for more than a half-century. After a planned massive development including a new NHL arena fell apart in 2018, the NCC went back to the drawing board and decided to develop the land in smaller parcels.

In its current plan, the NCC anticipates about 7,500 people will be housed on the site at full build-out, with 12.5 hectares dedicated to parkland. The federal agency says it wants 25 per cent oft he homes to be “affordable”.

Developers competing for the first phase will work on the site at 665 Albert St. near the new Ottawa Public Library/National Archives and the Pimisi Light Rail Transit station.

Five teams competed for this phase, and three succeeded in moving to the short list:

Guidelines for the developers state that the minimum number of residential units to be build in the first phase will be 600, of which 30 per cent must be considered affordable. The NCC says it will announce the winning team by January, 2022.

The NCC says it will only consider developing other parts of Lebreton Flats when market conditions are right, but CEO Tobi Nussbaum says there will be “further procurement elements” within the next 12 months.

“We want this first parcel to set the tone,” The Ottawa Citizen quoted Nussbaum as saying after the NCC board meeting.

In general, the concept plan proposes that the site be developed over “broad development timelines” in the first, second and third decade.

However, in the short term, the NCC plans to do some construction this year, building pathways connecting the Bayview and Pimisi Stations, and the Ottawa River Pathway.

The NCC indicates the scuttled NHL arena could still have a place in the development. The concept plans allow for a “major event centre” on Albert Street between city Centre Avenue and Preston Street. However, the plans also include an alternative to continue the mixed-use neighbourhood to the east if the arena doesn’t happen.

Separately, the NCC board endorsed the design of the $192.9-million OPL/LAC project, the first new LeBreton Flats institutional structure.

Aecon Construction fined $90,000 after worker Injured by reversing bulldozer at...