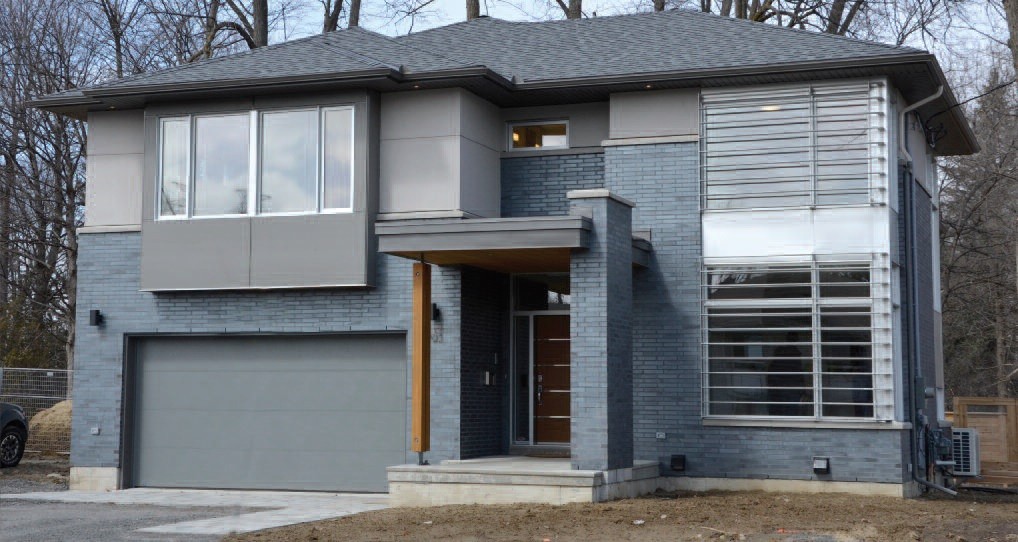 President Ross Elliott says Homesol’s training and experience in green building allows the company to find the optimum paths and building assemblies to ensure the best possible outcomes at the least cost and complexity for any size and type of project. Its Riverpark Green project services included energy design, testing, inspection and quality assurance to ensure, at every step of the way, that the home would attain R-2000 levels.

“We start with a preconstruction energy modelling of the home to ensure it will meet R-2000 performance levels, which means at least 50 per cent better than building code.”

Elliott says his team will regularly visit the site to check that the air barrier has been maintained and then will conduct a pre-drywall inspection to confirm that the insulation is continuous and has been well installed. “We’ll also conduct a blow door test to ensure the air tightness and draft proofing is what was set.”

Once all of the mechanical and electrical systems are in, a final inspection will ensure the home is performing to the anticipated levels.

Elliott says a typical R-2000 or Passive House will include two to four times more insulation in the foundation, walls and roof than required by building code, as well as triple glazed windows with insulated frames. The result is a building that is up to six times more airtight and 80 per cent more energy efficient than a typical new home.

The Riverpark Green home, he says, meets an exceptional EnerGuide Rating of 89, saving approximately 7.9 tons of greenhouse gas emissions annually. “It exceeds the requirements for a Certified R-2000 Home, with a calculated 55 per cent annual energy savings for heating and cooling, and with 73 per cent less air leaks compared to a home built to code, ensuring greater year round occupant comfort.”

In addition to higher insulation levels in the walls, ceilings, basement walls, basement slab and floor above the garage, he says the home includes warmer windows with reduced potential for condensation and mold, and a high performance heat recovery ventilation system that supplies healthy, fresh air throughout all rooms.

At current energy costs, this home will save approximately $845 per year over a typical new home, equivalent to the rate of return on a $42,000 term deposit at two per cent interest.”

Elliott says this is the conversation builders need to be having with homebuyers. Greater insulation levels make up an incremental additional portion of a home’s cost. However, he says builders need to translate that additional cost over the life of a mortgage.

“Yes, it may cost $10,000 more to build to R-2000 but what does that really mean as a monthly payment on a $300,000 mortgage over 25 years? The cost is insignificant and the monthly energy savings to the homeowner will more than cancel that out.”

He says when homebuyers start to realize the positive cash flow, better resale value long term, and the energy savings in combination, then the light will go on. Since R-2000 construction is generally two steps ahead of current building codes, a homeowner who buys a home today can sell that home in 15 or 20 years and find that its construction still meets current building code standards, which makes it an easier sell.

Elliott says beyond consumers, the construction industry must also come to a better understanding of energy efficient construction. “RND understands that any building can be designed to be more efficient. The Riverpark Green home is traditional in many ways. It is beautiful, warm, and incorporates a lot of wonderful natural light. People walking in will not recognize it as being anything but a lovely home.”

Builders, he says, must set aside their resistance to change. “We hear from installers only install a certain brand of furnace. Change the brands of products you’re willing to install. Or we hear from an insulator that it would be too costly to provide continuous insulation but then when we get them to break down the actual cost, they find it is insignificant.”

He says an R-2000 home is better quality and also more resilient. In the case of a long-term power outage for instance, he says it would take days for the temperature to drop even a few degrees while in a conventionally built home there would be concern about pipes freezing.

Elliott says that both builders and homebuyers need to understand that change is coming and coming fast. Buildings are a significant contributor to climate change. While there is a minor up front cost to more energy efficient construction, the energy savings means there is no net cost to building a home that is carbon neutral.

“Homes are becoming more energy efficient,” he says. “It’s something we’re drifting into through planned building code changes between now and 2030, but with a little push from builders and homebuyers we can get there much faster.”

Elliott says the requirements for R-2000 at the moment are actually fairly common sense. The new R-2000 standard that will be coming out will be tougher and will move the market, again, a little closer to the goals of energy independent homes that produce all of their own power on an annual basis.

“What RND is doing is building for the future of the industry. They are future proofing homes so they are better now and will stand the test of time. We congratulate them for their foresight.”