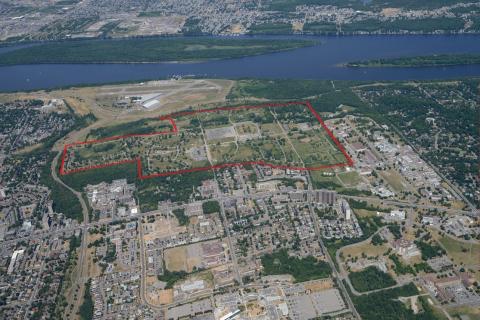 The City of Ottawa’s planning committee has unanimously agreed to recommend that Ottawa City Council approve the Former CFB Rockcliffe Community Design Plan, Official Plan Amendment and Secondary Plan, resulting in what Canada Lands Company (CLC) says will be the a start to construction within months for what city councillor Tobi Nussbaum calls the largest redevelopment project in the area since the city’s amalgamation.

City Council is expected to consider approval of these plans on Oct. 14, CLC says on its website.

“The city’s planning committee will soon be considering the proposed zoning for this new community. Canada Lands Company also anticipates conditional approval of the proposed draft plan of the subdivision in October,” CLC says.

The proposed development will would bring about 5,500 housing units to the site. Most will be six storeys or fewer, but there would be some larger structures – as tall as 20 storeys, near Montreal Rd. and the Sir George-Étienne Cartier Parkway.

Once it is fully developed, the community will provide a wide range of housing types, with all the commercial and public amenities that will be needed to sustain healthy and active lifestyles in the 21st century, CLC says. “A key aspect of this community will be its integrated system of pathways, parks and natural areas, which will offer access to open space for everyone living or working in the community.”

The crown corporation says the first residents could move in by 2017 and the homes will be built over the next 15 to 20 years. “During that period, the effectiveness of the roads, public transit, and other public services will be monitored, evaluated, and enhanced as development proceeds. A leading-edge Low Impact Development stormwater system, which will use vegetation and new technologies to manage water flows on the site, will also be monitored and adapted as new techniques in sustainable development emerge.”

Councillor Nussbaum, whose ward includes the area, told CBC News the plan was “visionary” and would be the biggest of its kind since amalgamation — but would only be a success if properly realized.

“The key to success here is we have to make sure that people have options to take transit, to get on their bikes, to walk places,” CBC quoted him as saying.

“If not, and this is important, it’s going to exacerbate existing transportation problems. So transportation is key. It could be the Achilles’ heel if we don’t implement properly.”

Ottawa-Vanier Liberal candidate Mauril Bélanger, the federal riding’s incumbent MP, asked for a change in the height for some buildings to preserve the sightlines of people living nearby.

He also requested sprinklers in every building, a sculpture garden to honour the Algonquin, and a long-term care home on the property for Aboriginal veterans.

In an interview with CBC, Bélanger said he wants to ensure the development is a sustainable jobs creator and doesn’t become a place where people live but work elsewhere.

“If there were not a substantial number of jobs it would be a bedroom community and it would jam (traffic) circulation everywhere in the morning and in the afternoon,” he said.

“It has to become a sustainable community, one where the environment is a prime consideration. And it is becoming that.”
When Kanata South Councillor Allan Hubley asked who would pay for the long-term care home, Nussbaum said a funding request was in the works for one focusing on homeless veterans.
CLC officials told Hubley that Ottawa builders are “adamantly opposed” to sprinklers in single-unit homes as opposed to multi-unit buildings, CBC reported.

CLC purchased the former air force base in 2011. Original development plans were stymied because of Algonquin land claims, which have since been resolved.