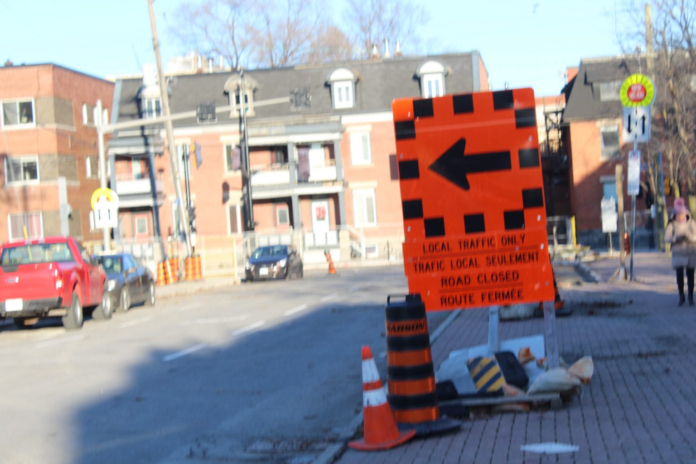 Ottawa has $1.9 billion of construction infrastructure projects under-way or planned for 2022, says the city’s acting director of infrastructure services.

“While construction was deemed essential during the pandemic, the construction industry has identified challenges with supply chains and labour shortages that has had an impact on the city’s projects.” Carina Duclos wrote in a December memo to city councillors.

“The city continues to work closely with the industry to mitigate and overcome challenges while complying with restrictions and recommendations provided by municipal, provincial, and federal health officials, as well as the Ministry of Labour, Training and Skills Development. Most recently, this included the rollout of the city’s Vaccination Policy to all city vendors,” she wrote.

“Infrastructure Services has nearly 600 active projects at different stages of implementation (from initiation to closeout), with a total budget authority of approximately $1.9 billion,” Duclos wrote.

Here is an update of ongoing and planned projects as outlined in her memo:

The Montreal Road revitalization project represents a $64 million investment in local infrastructure. This multiyear project involves the renewal of Montreal Road from North River Road to St. Laurent Boulevard and includes watermains and sewers at various locations, landscaping/streetscaping, and the overlay of the Vanier Parkway from Montreal Road to McArthur Avenue.

A significant amount of the work on this project is now complete including hydro pole burial from North River Road to Vanier Parkway and a three-lane cross-section, including cycle tracks, between Vanier Parkway and Lafontaine Avenue. The project started in May 2019 with utility relocations and after two years of construction completed, the project is expected to finish in late fall 2022.

The project also includes the Kennedy-Burnett Stormwater Management Facility Improvements at an additional $15.8 million. In 2021, major milestones included the installation of sewers and the significant progress on the eastbound traffic lanes which are now nearing completion.

The City of Ottawa is investing $10 million in a multiyear project to enhance and revitalize Ottawa City Hall. Ongoing improvements include replacing various roof areas above Council Chambers and the administration building, expansion joint repairs to the parking garage, fan replacement for the Laurier Avenue administration building, heating and cooling work, as well as improvements to air quality circulation in the parking garage. The Active Living Club simultaneously funded their own accessibility improvements to the changerooms and washrooms with co-ordination assistance from infrastructure services.

In 2022, work will include the construction of a new Laurier Avenue after-hours entrance to provide accessible access to the parking garage elevators. It is anticipated that the City Hall improvements will be completed in summer 2022.

Since 2019, the city has invested $12.95 million for the renewal of multiple features at the Nepean Sportsplex. Work expected to be completed by the end of 2021 include the pool HVAC upgrade, north entrance sign replacement, and air conditioning unit replacement from the Nepean Visual Arts Centre.

On Nov. 29, a ground-breaking event was held, hosted by his worship, Mayor Jim Watson and attended by many dignitaries from the federal and provincial governments, as well as representatives of Indigenous communities to mark the official start of construction.

This $22.6 million project is being completed with the assistance of Investing in Canada Infrastructure Program (ICIP) and Public Transit Infrastructure Stream (PTIS) funding. The City of Ottawa is contributing $14 million. This project includes an Indigenous community benefits component with a requirement for the contractor to provide job opportunities to the Indigenous community and the future installation of Indigenous art.

It is anticipated that the multi-use pathway across the Chief William Commanda Bridge will be open to the public by late 2022. The remainder of the bridge rehabilitation work will be completed by the end of 2023 with minimal disruption to bridge users. Final landscaping and site cleanup will be completed by summer 2024.

In fall 2021, we crossed a huge milestone with Ādisōke when we entered the construction stage of this project. Early excavation and shoring were completed on the site earlier this year in preparation for the handover to the main contractor, PCL Canada, in late November. The construction period for this project is 2021-2025, with the building ready for use and an Official Opening in 2026.

Ādisōke funding will come from multiple sources, with the City of Ottawa and the Ottawa Public Library contributing $170 million toward the construction of the facility, along with $28 million for a 200-space parking garage, and the Government of Canada contributing $136 million for its portion of the project.

The project includes the conversion of the existing transit facilities on Waller Street (between Nicholas and Laurier) to accommodate the new, post-LRT Transit network. This project will address missing links and improve the connections from downtown eastwards. Upon its completion, the enhanced cycling facilities will separate cyclists from mixed traffic, greatly improving the level of comfort and safety for all users. The design will integrate cycling connections with the Mackenzie King Bridge and the Rideau Canal Eastern Pathway. It will also include safety measures such as separated signal phasing and protected intersection crossings.

The project has begun with initial preparation work underway. The main construction portion of the project is anticipated to run from spring to the end of summer 2022.

The renewal of Greenfield Avenue, Main Street (Hawthorne to Colonel By), and Hawthorne Avenue represents a $37.9 million investment to renew aging infrastructure and enhance roadway features. This project includes the revitalization of the right of way in the northern section of Old Ottawa East and includes replacing aging combined sewers with separate storm and sanitary sewers, replacing sections of older watermains, and reconstructing the roadways, including the implementation of complete street features and a new signalized intersection at Main Street and Colonel By Drive. Advanced work began in early fall 2021 and the main construction project will begin in 2022. The project is expected to be completed in late 2024.

The reconstruction of Albert Street, Queen Street, and Slater Street from Empress Avenue to Bay Street and Bronson Avenue from Queen Street to Laurier Avenue is a $41.1 million multiyear project that includes the replacement of portions of the existing sewers, roads, and watermains as well as the reconfiguration and reconstruction of the right-of-way. Streets will be reconstructed to follow the complete streets framework by integrating accessibility, pedestrian movements, cycling facilities and bus transit. Utility relocations started in the summer and will continue through the winter. The major construction will start in early spring of 2022 and is scheduled to be completed in the fall of 2024.

The design, site plan approvals, and building permit process are planned to be finalized in summer 2022. Construction of this project is to be co-ordinated with the Kanata North Claridge – Uniform Development.

The City of Ottawa has completed the functional and preliminary design for the Bank Street Project and is in the detailed design phase. The proposed renewal of Bank Street includes the installation, rehabilitation and/or replacement of various components of the underground infrastructure including watermains, sanitary sewers, and storm sewers.

The project also includes the rehabilitation of streetscape elements including sidewalk, cycling, transit and vehicle provisions, street lighting, traffic signals and streetscape improvements. Given the overall size and complexity of the project, the construction will occur in several phases. The construction timelines for this project are subjected to budget approvals and overall construction coordination.

Federal and Provincial stimulus funding programs have become available to help offset the economic impacts of COVID-19. From the onset of the pandemic, the city has been well-prepared to respond to these programs and ensure that the city maximizes opportunities for funding our infrastructure projects. This year, the city has received funding approval for:

The city has applied for additional funding:

Construction set to begin on new energy centre in Gatineau