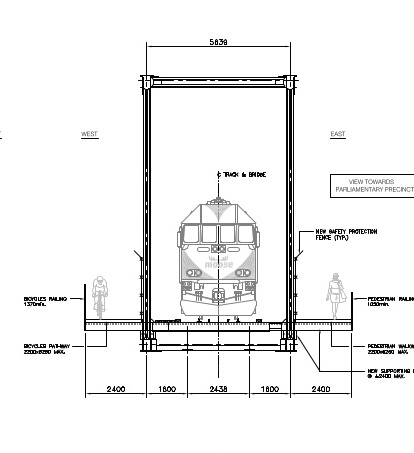 A team of six civil engineering students from the University of Ottawa (uOttawa) will invest much of their 2018/19 academic year advancing MOOSE Consortium’s plan to adapt the Prince of Wales Bridge between Ottawa and Gatineau, the consortium says in a news release.

(MOOSE and the City of Ottawa have been battling each other through the Canadian Transport Agency and in the courts over the bridge’s future. While MOOSE wishes to use the currently non-functional rail bridge as a key component of a proposed privately owned interprovincial rail system, the city is resisting and considers the bridge a part of its long-term transit system plans, which would provide a link between Ottawa’s and Gatineau’s systems.)

Moose says the student project design will accommodate combined operations of full-sized bi-level regional trains and smaller LRT trains, respecting federal regulatory and safety management conditions. It will include cantilevered cycling and pedestrian trails, a pedestrian bridge over the tracks on the Lemieux Island and Parliament Hill views.

A second engineering student team project will advance the plan for the rapid design and deployment of the innovative modular start-up station “kit” that MOOSE would lease to independent station franchisees. Where existing tracks are in service, this concept would enable property investors to commence train service at low cost within just months of obtaining basic permits. This will provide developers and municipalities the time required within each unique locality to undertake all the public consultation, negotiation and planning that permanent stations and surrounding facilities require.

Both teams will be supervised by senior civil engineer Wojciech Remisz, president of the REMISZ Consulting Engineers of Ottawa, who in 2016 prepared preliminary multi-use plans for rehabilitation of the Prince of Wales bridge for the MOOSE Consortium. In other work, his company provides quality verification services for Ottawa’s OLRT project. For the start-up station system design project, the student team will use preliminary reports and concepts prepared within MOOSE Consortium by senior conservation architect and urbanist Mark Thompson Brandt, president of MTBA Associates Architects. In a news release, MOOSE says Alan R. Perks, engineer- in residence for uOttawa’s Department of Civil Engineering invited Remisz to suggest some useful projects and to serve as a mentor for this year’s fourthyear student “capstone projects”.

Remisz put forward the two projects on a list that students could choose from and received a very positive response. “Apparently this was the top most interesting project on the list. They had to bid to get it. The students loved the idea and swamped me with questions about MOOSE. It was a fantastic, highly stimulating meeting,” he said.

“They have a free hand to develop the detailed design for the modular start-up station system, based on the sustainable re-purposing of railway shipping containers”, said Remisz “They will be free to use their imagination, while also incorporating our core values of intrinsic safety, sustainability and optimization of the passenger experience.”

“At our initial team meeting on the stations, one suggested to have a split level building, with a mezzanine accessible by stairs and a lift so people have a pleasant place to wait, including wi-fi, seating and tables. Another suggested to have commercial units, including a café, much like MOOSE’s proposal for market stalls, and other commuter conveniences that suit individual locations,” he said.

“Our modular flexible start-up station system concept requires some novel thinking to develop the design,” said Brandt. “Our core idea is to control up-front cost and time and incorporate rigorous and consistent safety specs into the first wave of several dozen stations throughout the entire region. We are planning for a high-quality but relatively simple initial roll-out. Eventually though, each locality’s permanent station will have a unique look amongst the various urban, suburban, village and rural/recreational sites. Some will rehabilitate and retrofit existing and historic buildings.”

The civil engineering “Capstone Project” is for academic credits towards graduation. It provides students the opportunity to learn from professional mentors throughout the full academic year to April 2019.

“They will be asked to produce well-developed preliminary designs with cost estimates and drawings and renderings conforming with applicable standards and codes,” said Remisz. “At the end of the term in December they will present their progress reports, and by April they have to finish their designs and make formal presentations to the faculty and judges.”