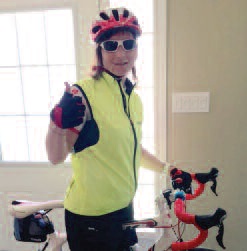 BY SHELLEY MCLEAN – Special to The Ottawa Construction News

It’s one thing to commit to a cycling event like THE RIDE. It’s very different to commit to such a challenge when you have a limitation, like an artificial leg. But that didn’t hold back Serena Malin.

Diagnosed with osteosarcoma at the age of 16, Serena always believed she would be okay. She was admitted to a children’s hospital in Halifax, where she received chemotherapy, blood transfusions and had her left leg amputated just above the knee. The cancer returned a year later, this time it was osteosarcoma in her left lung. Once again, Selena went through chemotherapy and surgery to remove the cancer from her lung.

Today, in her mid-40s, she’s healthy and working as a senior programmer analyst in Ottawa. She’s a first responder with the Canadian Ski Patrol and Priority One. In fact, Serena was the first person with a disability to join the ski patrol in Canada.

This year, she’s back with THE RIDE and once again a part of the Brick Peddlers team led by Robert Merkley. “THE RIDE gives me a goal to work toward each year. I get out and cycle as much as I can.” She admits it wasn’t easy in the beginning to train because of her limitation. “It took some trials and tears, but I persevered and eventually mastered cycling. It’s become something I really enjoy.”

Serena says the first year she registered for THE RIDE, she just signed up as an individual rider. “I was new to cycling. I didn’t know anyone, but wanted to be part of a team. It was suggested by one of the organizers that I join the Brick Peddlers. I am happy to be a member.”

While Serena didn’t receive cancer treatments here in Ottawa, she’s had visits to The Ottawa Hospital. “I have had follow up appointments at the Cancer Center and am being followed by nephrology as well. The treatments I had were quite hard on my kidneys. I have chronic renal failure as a result.”

On Sept. 11, Serena will be riding again and she has a message for others: “Get out there, get some exercise, have fun and raise funds. This is for an important cause and important research that is greatly needed. You will be fit, you may discover a new passion, and your efforts just may help save a life.”

Shelley McLean is a communications officer with The Ottawa Hospital Foundation