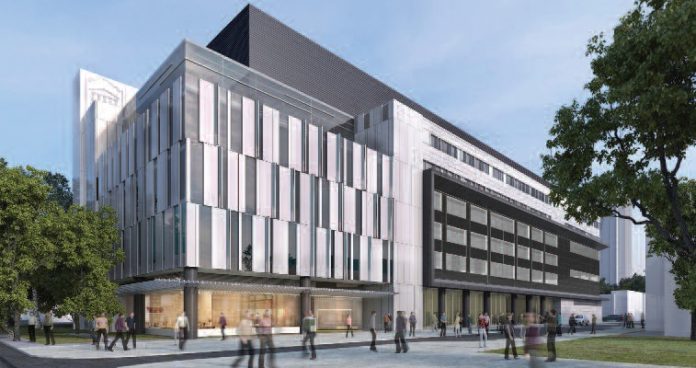 Lariviere Construction has applied more than four decades of expertise in concrete formwork and repairs, steel structure fabrication and masonry work, as well as its expertise in collaborating on complex projects, to help advance the University of Ottawa Learning Centre project.

Vice president Patrick Lariviere says his company was charged with designing a custom formwork system to enlarge the diameter of the structural concrete support columns for a large part of the building.

“A total of 38 columns required enlarging to help support the new snow loads on the supporting roof,” he said. “Our work included: scarifying the existing columns, installation of new reinforcing steel, application of concrete adhesion products, installation of formwork and pouring the new columns.”

Formwork was custom made from steel. In order to pour concrete on the restricted site, he says pumps were strategically positioned outside and then concrete lines were run through window wells and building openings to reach their destination. “Some of the columns also required enlarging by means of unconventional formwork and required custom steel forms that will be onetime use only. These needed to be engineered specifically for this job.”

One of the biggest challenges in delivering the work was the requirement to keep the school open and operational. Lariviere says on other projects, the university has been able to shut down sections of buildings for work to take place. That was not possible in this case.

“Our biggest challenge was co-ordination to conduct our work without affecting the school schedule too much. Noisy work was conducted at night and regular work during the day.”

He says the timelines have also been tight but that Pomerleau’s project approach and on-site team has been very successful in managing the schedule. “We worked with Pomerleau to conduct our scheduling and this worked quite well. Our site organization and work timelines were on point.”

Originally established in 1940 as a masonry contractor, Lariviere started its formwork and concrete division in 1974. The company, which is now ISO 2016 certified, is owned and operated by the third generation of Lariviere owners.

The team has been involved with a variety of projects including the Renfrew Water Pollution Plant, the Robert O. Pickard Environmental Centre, the Fairmont Chateau Laurier and the Chaudiere Bridge.