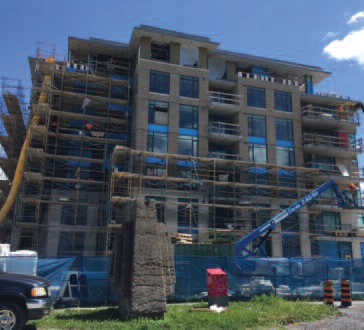 Local real estate development firm Morley Hoppner has contributed to many distinct and landmark projects across the city throughout its history. The company is focused on design-build, construction management and development projects within the high rise residential and ICI sector of the market.

The firm is committed to creating and growing existing partnerships leveraging its long standing history of quality built construction projects in Eastern Ontario. The company is currently involved with several notable projects:

Slated for fall 2016 completion, Two the Parkway is a seven-storey condominium complex designed by Barry J. Hobin & Associates, with 42 penthouse, garden, one and two-bedroom suites in 66,000 sq. ft. of space. There is also a 26,000 sq. ft. belowgrade heated parking garage.

Located at the corner of The Parkway and Teron Rd. in Old Kanata, the project’s design has been focused on people who may be looking to downsize from family homes. Morley Hoppner vice president Brian Morley says the units are a little larger than a comparable downtown property and attention has been paid to exterior landscaping and resident use spaces. “Beaverbrook is lush with mature trees and parks and we wanted to ensure this feeling continued through both phases of the property.”

The project has been designed to maintain a former Canada Post building on the site, which is a local landmark. Morley says the building will retain its current structure and look but be converted into four garden bungalows as Phase II of the project.

“The most unique aspect of this project is the location. It is rare that a new development can be placed amongst a well established neighbourhood. The views from Two the Parkway are beautiful with the lower floor looking out over the dense wooded neighbourhood of Beaverbrook while the upper floor views extend to the Gatineau hills and downtown Ottawa.”

Slated for completion this summer, Yard & Station is a distinct condominium project focused on a high level of custom design. Morley says the goal was to create customdesigned units to suit each homeowner’s unique requirements, backed by an energy efficient and high quality design to ensure comfort and to minimize heating and cooling demands.

Located in a former school constructed in the 1930s, the 30,960 sq. ft. structure includes 8,830 sq. ft. of parking and nine lofts in three storeys. “The original school house was built long before Ottawa was declared a seismic zone susceptible to earthquakes. Therefore, the structure was not reinforced adequately so considerable effort and expense was made to brace the building to today’s standards. The positive aspect of this exercise is that it allowed us to provide a new building envelope with today’s standards of energy efficiency.”

Morley says the entire structure, including the foundation and key elements of the historic stone masonry were retained and incorporated into the design. Although the brick and much of the stone was replaced with new material, he says it is an identical match to the original schoolhouse design. “It was important to our firm to ensure the building maintained the look and feel of the old schoolhouse as this building is a Hintonburg landmark.”

Morley says the large schoolhouse property will be severed and zoning has been granted for a 17-storey condominium tower. “Given the nature of the condominium market in Ottawa, we are currently determining the viability of proceeding with an apartment building in this location.”

The 54,300 sq. ft.  Ottawa Innovation Centre at Bayview Yards will bring together innovators, entrepreneurs, industry leaders, investors and the community into one centre for “technical, business and market capabilities, resources and expertise that helps technology entrepreneurs and companies launch, grow and thrive” according to the City of Ottawa’s website.

Interior spaces will include incubator spaces, meeting rooms, drop in spaces, a café, accelerator space, training rooms plus lower level bike storage and shower facilities. Invest Ottawa will have offices on two floors of the center.

Set to be completed in mid-November, the center has been designed for creativity and collaboration, Morley says. Although there are some private meeting rooms and offices, the majority of the space is open concept which creates a flexible, collaborative space encouraging people to come together.

The building has also been designed to achieve LEED Gold, in part with photovoltaic rooftop panels. “The biggest challenge has been working with an aged building that had essentially been abandoned for a number of years. This presented numerous challenges from a cost perspective to get the building structurally workable to the point where we could design a current building envelope to meet the National Model Building Code and LEED Gold requirements.”

Morley Hoppner has also transformed 172,750 sq. ft. of space formerly owned by BlackBerry that is set to be occupied by Ciena, a global leader in optical networking. The $20 million project involved a complete renovation of the building, which is now being used by Ciena for office space, labs and a data centre.

“We continue to develop high rise style residential but remain very active in the ICI sector working on commercial and industrial projects. We are pleased to be part of the RendezVous LeBreton’s IllumiNATION proposal for the reincarnation of the LeBreton Flats space in downtown Ottawa among our other future projects.”