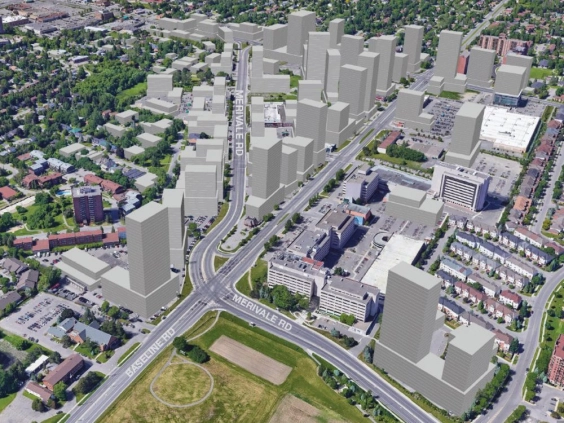 Ottawa’s municipal planning and agricultural/rural affairs committees have voted to approve what city staff describe as a “moderate” expansion of the urban boundary as part of its growth management strategy for the city’s new Official Plan, and their decision has been ratified by City Council.

The decision leaves the city’s homebuilding sector dissatisfied, because the industry fears land shortage, price pressures, and NIMBY (Not in my backyard) opposition to increased intensification – requiring taller and more densely packed buildings in the urban area. However, the decision doesn’t go far enough to satisfy some agriculturalists and urban activists who say the city is going too slow on intensification.

City staff presented three options; one that would continue the current rate of intensification, the other that would increase it “moderately” and the third– supported by some rural and urban planning activists – that would restrict virtually all development within the city’s existing urban boundaries.

The approved a growth management strategy would add between 1,350 and 1,650 gross hectares of residential land and strategically located employment land to Ottawa’s urban area, the City of Ottawa said in a news release.

The city needs a growth management strategy in place before it can develop its new Official Plan, which will guide development and growth in Ottawa until 2046. “The city’s goal is to minimize the need to expand the urban boundary by making efficient use of land already within the area,” the statement said. “The committees agreed some expansion is needed to meet housing demand as Ottawa’s population grows by an estimated 400,000 new residents within that timeframe.”

The balanced scenario recommended by city staff pairs what is described as a “moderate expansion of the urban area: with a requirement that 51 per cent of new dwellings be built in already developed areas. That intensification target would rise to 60 per cent by 2046. “That scenario would provide greater housing diversity within built-up areas as well as sufficient housing supply outside the Greenbelt,” the city’s statement said.

As well, the committees approved criteria to limit expansion to areas near existing or planned transit hubs. “This complements the city’s goal to expand the number of 15-minute neighbourhoods in Ottawa – communities where people can live without a car because daily needs are all within a 15-minute walk of home,” the statement says.

To ensure protection for prime agricultural lands, the city would exclude from consideration any lands that are in an Agricultural Resource Area. Such lands could not be included as part of any expanded urban or village settlement area.

The approved growth management strategy will guide the policy framework for the new Official Plan to achieve Ottawa city council’s approved targets to reduce emissions 100 per cent by 2050, as set out in the city’s Climate Change Master Plan.

After city council approved the strategy on May 27, staff started work to update the Energy Evolution model. Work will also proceed on the Infrastructure, Transportation and Greenspace Master Plans necessary for implementing the Growth Management Strategy and Official Plan policy direction, the statement says.

In presenting the case to restrain curbs on the urban boundary, the GOHBA asked urban planning firm Fotenn to rough the building masses in communities that, according to the firm, would be required to satisfy a city-suggested intensification target.

“We feel to have an informed decision about the intensification rate that’s being proposed, that modelling and mapping of where that intensification is going to go and what type of buildings are expected is an important part of that decision, and that hasn’t come through yet,” the Ottawa Citizen quoted GOHBA executive director Jason Burggraaf as saying.

“The (city) staff say they’re going to provide it at the end of the year, but that’s too late. We’ve already made the decision by then.”

One image shows a dense collection of highrise structures near Baseline and Merivale roads, and the other shows various mid-rise blocks rising in a  central Bronson avenue neighbourhood.

Burggraaf said Fotenn estimated the intensification using a “most likely” scenario using directions already in community plans and where zoning bylaws will probably be upgraded to include larger buildings.

The Fotenn drawings include assumptions for new buildings in the area around the intersection of Baseline and Merivale Roads, as well as in Dow’s Lake, Vanier and Westboro. Fotenn is a GOHBA member.