LTR Industries president Brian Vlaming took the helm as the Ottawa Construction Association’s (OCA) 2018 chair at its annual general meeting on Feb. 13. About 420 members registered to attend the event at the Centurion Event Centre.

In his acceptance speech, Vlaming said the association under 2017 chair Greg Clunie developed a strategic plan with several working projects so the “OCA may stay ahead of the decline that other associations are experiencing.”

“In a nutshell, the focus of the plan is to grow the membership by increasing the value of being a member of the OCA by expansion of the education and professional development program, as well as the creation of a major industry symposium,” he said.

Vlaming said as the OCA prepares to move to its new headquarters on Auriga Dr. in June, it will be adding two new staff members – one responsible for membership development and liaison, and the other for member training and facilities.

Vlaming began his career in the skilled trades in 1978 with a carpentry apprenticeship. After working in LTR Industries’ millwork shop for several years, he assumed a greater managerial role and eventually bought the business, which currently employs 30 people.

“Education plays an ever-increasing role in all of our lives,” he said in a statement. “OCA offers great value to member companies of all sizes through its robust education, training and professional development programs. I see an opportunity for all our members to access these services and to learn and grow in a challenging and ever-changing industry.”

Financial statements approved at the AGM indicate the association continues to have a healthy financial position, as it completed the purchase of its new headquarters. Net assets remained nearly the same from 2016 at $6,939,981.

Membership declined slightly last year by 25 members to 1,160, the only time (other than 2013) since 2000 that membership has dropped. However, the solid balance sheet suggests that each member would have almost $7,000 in equity if the association operated as a business.

One explanation for the slight membership decline may be pressures on small and medium-size contractors, who are suffering from a decline in available work despite record-level overall building permit volumes. The City of Ottawa reported permits in 2017 increased by 3 from 2016 per cent to exceed $2.684 billion.

Unfortunately, much of the volume was in a “handful of mega-projects,” while there was a shortage of smaller and medium sized projects.

“As a result, the city’s largest general and subcontractors – those with the expertise and the resources to build the mega projects – thrived, while those in the middle of the market and below found themselves wondering where their next project would come from,” the OCA said in its annual report. “Indeed, some smaller-value public tender projects hosted at the OCA plans room saw as many as 10 or 14 bidders.”

“Meanwhile the question has to be asked: ‘What’s to come for the owners and buyers of the small and medium-sized jobs.’”

During the meeting, former OCA and CCA chair Serge Massicotte presented a report about the Canadian Construction Association’s (CCA) support for a legacy project to build a trade school in Haiti to help the impoverished nation recover form its devastating 2010 earthquake. There will be a special fund-raising golf tournament on Aug. 13, where the OCA hopes to raise at least $30,000 of the remaining $700,000 required to complete the project.

The 2018 OCA directors include: 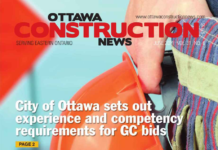 70 per cent of sub-trade contractors denied work opportunities on $1...