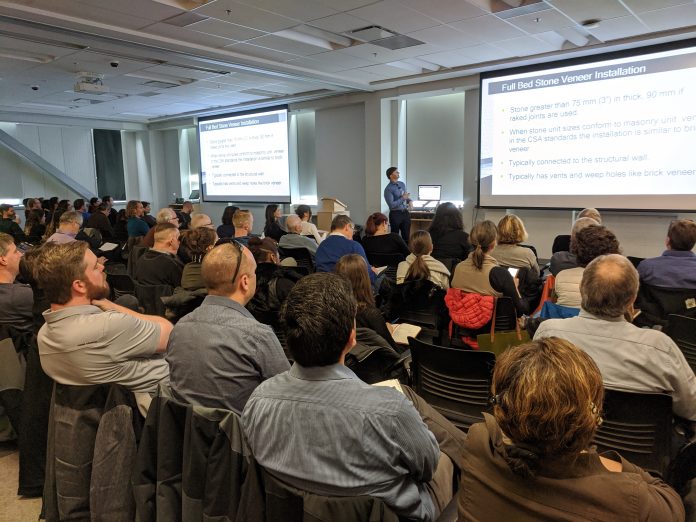 There are special challenges in renovating and restoring historic masonry buildings – notably managing compatibility of historical construction practices with current building technologies – and difficulties caused by fixes and renovations in the years between the original construction and now.

John Cooke and Chris Vopni from John G. Cooke & Associates Ltd., which specializes in structural engineering and heritage restoration, showed examples of problems they encountered when reviewing the historic Rideau Canal. The canal, originally built about 150 years ago, received restoration work in the 1970s and 1980s – and today these earlier restoration efforts are causing problems of their own.

Vopni pointed out to concrete (with rebar) used to repair locks – a building material never envisaged by the stone masons who built the original canal. “The sad thing is that on several other locks they are still putting concrete and reinforced concrete on the stone,” he said.

In another session, Brian Langenberg from WSP described non-destructive and minimally destructive testing methods to determine the scope and nature of renovation required, without making the problems even more severe.

These include a simple “visual survey” (both at grade level and with drones), possibly also including scaffolding, suspended access, elevating lifts and bosun’s chairs.

There are tools including a RILUM Test, measuring water uptake, to determine the porousness of building materials, a rebound hammer to assess material hardness, the cover meter to detect steel elements in concrete and masonry, ground penetrating radar to discover buried systems and anomalies in wall systems.

John Diodati and James Curtiss from EVOQ Architecture showed some of the challenges in working with buildings constructed over different periods of time, that had intervening renovations and now face real challenges.

Curtis said it is vital for consultants and contractors to have excellent relationships with the stakeholders. “Masonry is one of the few building components that could be considered to living and breathing,” he said. “It is critical that all stakeholders understand what is involved – what comes before, what comes now and how it will evolve.”

As an example, the West Block project at Parliament Hill is an “extremely complicated building” originally built between 1860 and 1909. “The West Block was built over a period when modern materials were coming into use.”

“By the time the last wing was built, they were using portland mortars and reinforced concrete” compared to the original stone mass masonry at the start. Then there were renovations and guttings later, in the 1960s, adding to the complexity, compounded by a lack of clear original building documents.

The level of complexity can be seen in the need for upwards of 14 mortar types, suitable for different phases and circumstances. Detailed documentation and planning have been developed to help on future maintenance, he said. 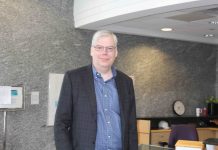