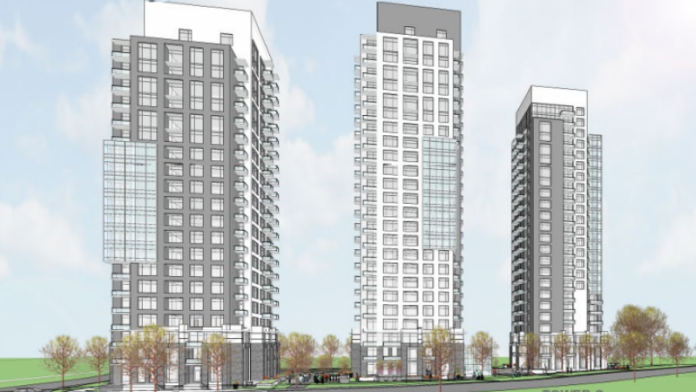 The planned residential towers in the city’s southwest area would contain 585 units (with studios, one and two-bedroom apartments), reaching 22, 24, and 26 stories. Fotenn Planning + Design says in documents filed with the city’s planning department that “a significant portion” of the units would be rental apartments.

The proposed development would have 552 parking spaces for cars and 312 for bicycles. There would a gym, party room and indoor pool as well as a cafe in 40,000 sq. ft. of communal space – and an additional 20,000 sq. ft. of amenity areas/.

The development would need to go through approvals including amendments to the city’s Official Plan, as well as zoning bylaws. The project is denser than set out in current Official Plan limits, and zoning rules currently require 300 more parking spaces than Richcraft plans to allocate.

Ottawa Business Journal reports that, according to planning documents, Richcraft held a public consultation with the Centrepointe Community Association last November to discuss the plan, where residents expressed concerns about increased traffic and density and a lack of parking that could result in an overflow of cars on to nearby streets.

“Given the transit-oriented nature of the development and its proximity to the Baseline Transit Station and the planned LRT extension, an effort should be made to encourage transit ridership within the development and a reduced parking rate would help achieve this,” the documents say. “An excess of bicycle parking is provided to offset some of the reduced private vehicle parking.”

The builder has envisaged an earlier project at the site and in fact received approval in 2013 for three 15-storey condos. But it shelved the originally planned development because of  “changing market demand for condominium units.”

CNL inaugurates new building made from Canadian-sourced wood as part of...