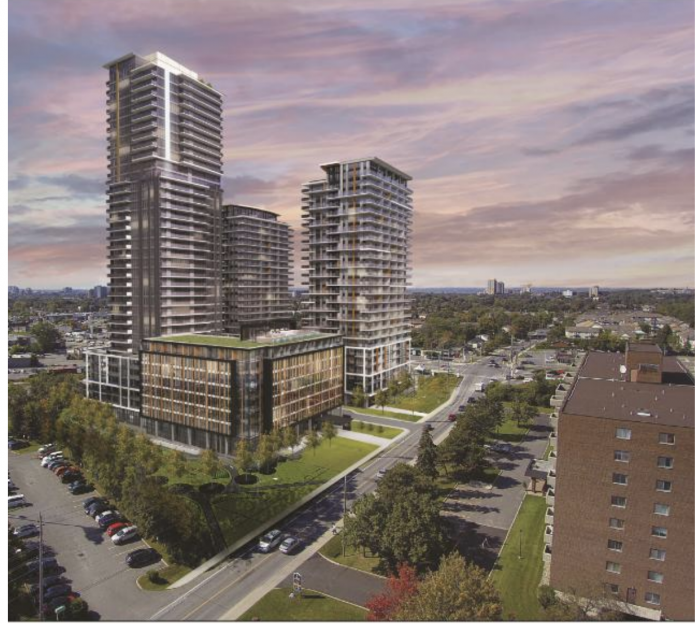 Ottawa City Council has approved several municipal Planning Committee decisions setting the stage for several residential high-rise buildings within a short walk of Light Rail Transit (LRT) stations. The move would help the city meet targets within the Official Plan around intensification near the stations, a city news release says.

Just 400 metres from Cyrville Station, the planning committee on July 9 approved Official Plan and zoning amendments to increase the existing 20-storey maximum building height. The change would allow for three high-rises – at heights of 25, 27 and 36 storeys – with about 850 rental apartments at the corner of Ogilvie Road and Cummings Avenue. An eight-storey hotel is also planned for the site.

The committee approved a mixed-use development on the block bound by Preston, Aberdeen, Beech and Rochester streets near the Carling station. The site, which is primarily a surface parking lot, would be redeveloped with three-storey buildings facing Preston Street, increasing up to 26-storeys at Rochester Street. The upper floors would include about 550 units, with the first phase planned as rental apartments. The ground floor includes retail and restaurant space, including a much-needed grocery store.

It also also approved plans to expand St. Mary’s Coptic Orthodox Church at the corner of Greenbank and Canfield roads. The church intends to build a new two-storey community centre and to expand and reconfigure its existing parking lot. The plan requires the church demolish several neighbouring houses that it owns, but fencing and landscaping would be added to mitigate the visual impact on nearby residential communities.

Ottawa Airport Parkway widening: Will the $35 to $40 million project...