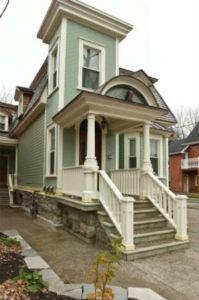 The City of Ottawa has announced the recipients of the 2012-2014 Ottawa Architectural Conservation Awards, recognizing commitment to local architectural heritage.

“The beautifully preserved properties honoured by the Ottawa Architectural Conservation Awards serve an important role: encouraging further investment in their respective communities,” said Mayor Jim Watson. “By recognizing these incredible achievements in restoration and conservation, we are reminded of the rich history that exists in Ottawa for residents and visitors alike.”

The Ottawa Architectural Conservation Awards recognize excellence in the preservation of the city’s architectural heritage. Awards were presented in five categories: restoration (return of heritage resources to original form, material and integrity), addition (additions to historic buildings), adaptive reuse (adaptation of an old building for a new purpose, retaining its heritage character), infill (new construction in an historic context) and other (conservation of engineering works, gardens, landscape features).

“The projects honoured at this year’s Ottawa Architectural Conservation Awards come from all corners of the city and will serve to give our city’s heritage community the profile and attention it deserves,” said Councillor Tobi Nussbaum, Chair of the Built Heritage Sub-Committee. “I congratulate all the recipients, and indeed all the nominees, for the commitment they have shown to conserving and preserving Ottawa’s built heritage.”

A jury of three heritage professionals considered the submissions and selected seven properties to receive the Award of Excellence, the top award:

Five additional properties were presented an Award of Merit:

As part of the awards ceremony, five properties and one heritage conservation district were presented with heritage designation plaques to demonstrate the City’s commitment to preserving and interpreting its cultural heritage.

Further information on all the award winners is available at ottawa.ca.