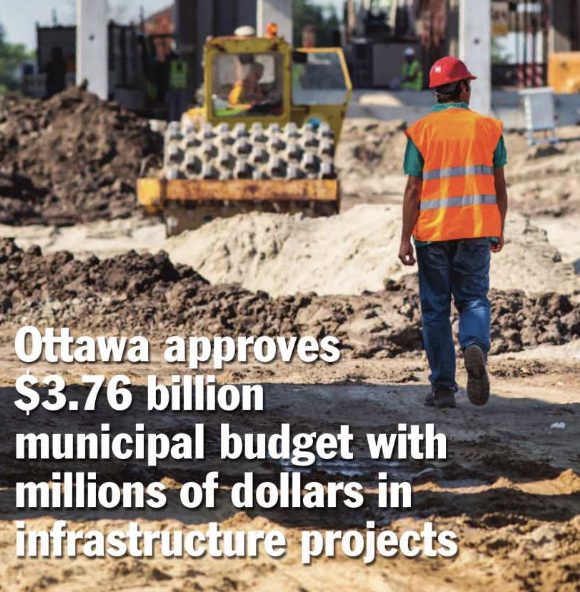 The City of Ottawa has approved a $3.76 billion budget for 2020, including significant infrastructure investments.

The budget is $136.8 million greater than 2019’s numbers, and incorporates a planned three per cent tax increase.

Among construction-related funding, the city says:

In other matters, council approved the preliminary policy directions that will be the basis for the new Official Plan. A draft of the plan, to be tabled in October 2020, will rely on new growth projections. By 2046, Ottawa’s population is expected to grow to 1.4 million, an increase of 40 per cent from 2018, or 402,000 additional residents.

Council approved Official Plan and zoning amendments for a large distribution warehouse in North Gower, just off Highway 416 at 1966 Roger Stevens Dr. While no tenant has been confirmed for the site, the proposed 65,000-sq. m. warehouse could employ up to 1,700 people.

Council approved a new Barrhaven Downtown Secondary Plan, with a goal of stimulating development that would ultimately result in more than 10,000 jobs within the town centre. The town centre will serve as a commercial district for the surrounding residential neighbourhoods in Barrhaven. Large retail stores will anchor the area, while Market Place Avenue will have smaller storefronts with a main street character.