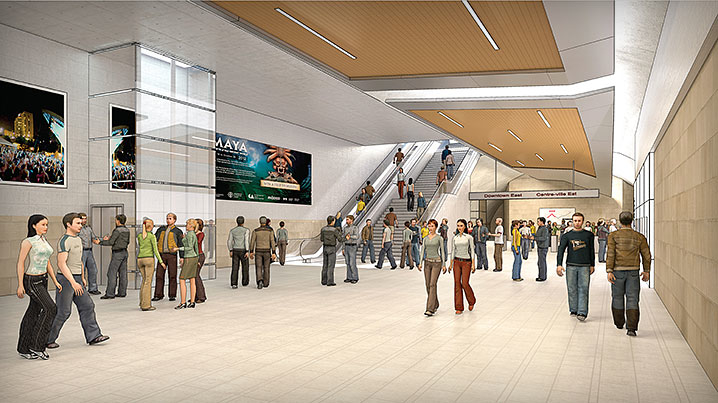 Construction of the new $2.1 billion Confederation Line light rail transit project should begin soon, with completion in 2018 – providing an overall boost to the city’s construction economy.

City council approved Rideau Transit Group to design, build, finance and build the mammoth project at its meeting on Dec. 19 after an extensive review process and comprehensive proposals by three short-listed consortia.

The consortia is led by Spanish builder ACS Infrastructure, with participation from Canadian engineering giant SNC-Lavalin and contractor EllisDon.  Ottawa firm bbb Architects is designing the stations on the 12.5 km east-west route, with underground stations for the 2.5 km downtown stretch.

Other contractors and sub-trades are likely to benefit from the work as the 13-station project absorbs capacity and resources, reducing competitive stress – and thus allowing higher profitability – for other projects to be built as the LRT project is completed.

The LRT project also includes the building and financing of the Highway 417 widening project from the Nicholas Street on ramp to the split with Highway 174.

“Today is an exciting milestone for this important project,” said Premier McGuinty at the announcement. “It will create jobs, help the environment by taking cars off the road and contribute to a better quality of life for the people of Ottawa.”

“Our government is pleased to invest in this important job-creating project for a new light rail corridor that will make public transit faster and more efficient for Ottawa residents,” said MP Galipeau. “This project demonstrates the Government of Canada’s commitment to working with municipal and provincial partners to support infrastructure improvements and transit solutions for the twenty-first century.”

“Council set a strong direction for this procurement to deliver an excellent light rail system that comes in on time and on budget. I am proud to say that we have succeeded,” Watson said.“Given the importance of this project to Canada’s national capital and its close relationship with our sesquicentennial celebrations in 2017, I am also pleased to announce that the City will be naming this system the Confederation Line.”

The report and Rideau Transit Group’s designs and construction schedule are available on the OLRT project website www.ottawalightrail.ca. In addition, the City will be hosting a number of design showcases for Ottawa residents to see Rideau Transit Group’s proposals first hand and have their questions answered by project staff.